(CNET) -- Following the outbreaks of SARS and avian flu earlier this decade, Sprint Nextel has taken the threat of a global flu pandemic very seriously. And in 2005 the company created a special group within its Emergency Incident Management team to plan what to do in such an emergency. 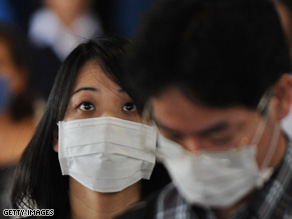 Late last week, when the World Health Organization started alerting the international community to the threat of the swine influenza that originated in Mexico, Sprint's four years of planning came into action and Sprint has been working through its checklist of actions.

On Friday it started posting information and updates on its internal Web site for employees. And by Monday, when the virus had started showing up in dozens of cases in the U.S., the company restricted travel to Mexico.

It also asked any employees going to El Paso, Texas, or anywhere else near the Mexican border to notify the company. But Sprint, which has only one call center in Mexico, has not closed any facilities yet.

By Wednesday, when the World Health Organization raised its pandemic alert to level 5, which is the second-highest level of alert that indicates a swine flu pandemic is imminent, Sprint started considering more drastic actions from its check list.

While it's still unclear exactly how severe or deadly the swine flu will be or even how devastating it will be the global economy, U.S. and International health officials are taking the threat very seriously. And as a result, so are many companies.

But the level of preparedness varies greatly among companies. And experts say that it's important for companies to take action now rather than wait until a full pandemic.

Research firm Gartner has been advising its clients to prepare as quickly as they can for the worst case scenario. For companies like Sprint that already have plans in place, the firm is advising clients to call their vendors to make sure that they are also prepared to do business during the outbreak and to test any remote communications contingency plans already in place. For those without a formal plan, Ken McGee, a vice president and research fellow at Gartner, suggests they get one as soon as possible.

"As the World Health Organization moves from a phase 4 alert to a phase 5 alert, which goes beyond the level achieved by both the Avian and SARS outbreaks, the likelihood of a major pandemic is almost certain," he said. "And it's very important for companies to have a pandemic contingency plan in place. That said, this is a time not for panic, but for straight talk and preparation."

Sprint Nextel is not the only large company to have developed a flu pandemic contingency plan. Several large technology companies, including Microsoft, General Electric, IBM, and Dell already have plans in place.

At least initially many companies are focusing on keeping employees healthy by restricting travel and encouraging workers in affected areas to work from home. But as the threat level rises, so will their reactions to situation. For example, Sprint is now considering whether to sanitize call centers and offices in regions where the virus has been identified or whether it should eliminate face-to-face meetings with employees who are living in regions where the swine flu has already shown up.

"With the alert level rising, we are having a lot of conference calls to decide what to do," said Crystal Davis, a Sprint spokeswoman and a member of Sprint's Emergency Incident Management team.

Microsoft has also activated its incident management team, which responds to various types of diseases, natural disasters and other emergencies.

"We're following the guidance from the Mexican government as far as our offices and employees," said Microsoft spokesman Kevin Kutz. "We are strongly encouraging everyone to work from home. The Mexico City office is open, but we are asking folks only to go in if it is absolutely necessary."

Global conglomerate GE has already decided to restrict employees to essential travel only to Mexico and it has updated its existing contingency plans to deal with a potentially larger impact from the swine flu, according to a representative.

Following the bird flu and SARS diseases earlier this decade, IBM in 2006 started including pandemics as part of its disaster contingency planning. The company has done an assessment of how many employees can work at home and what skills they have in the case some employees get sick. Outside of Mexico, though, IBM has not put any measures in place in response to the swine flu.

Cisco Systems, which also has offices in Mexico City, says it has not closed its office there. So far, no Cisco employees have been affected by the swine flu, but the company has decided to implement a range of precautionary measures. For example, it has restricted nonessential travel to, from and within Mexico. And since many schools in Mexico City are closed, it's allowing employees to work from home.

While most companies say they are monitoring the situation and providing employees with information about how to minimize risk of infection and what symptoms to look for, not all of them said they were restricting travel or making other major plans to deal with the situation.

Japanese electronics giant Sony has operations in the Mexican cities of Laredo, Mexicali, and Tijuana. The company is not restricting employee travel, but is "closely monitoring the situation at all of our facilities," a Sony representative said.

PC maker Dell, based right outside Austin, is also not asking employees to change any travel plans or temporarily closing any offices right now. Company spokesman David Frink said Dell does have a pandemic flu plan in place.

And Verizon Communications, the nation's second largest phone company, said that it is "simply monitoring the information coming from global and national health organizations about cases and casualties but we continue to operate on a business as usual basis with no travel restrictions or constraints on activity of any kind. There's no need at this time to take further action," according to a company spokesman.

But Gartner's analysts say it is very important for companies to develop contingency plans in case an outbreak of swine flu forces them to close offices or take other operation-disrupting actions.

Nick Jones, another Gartner analyst, recommends in a blog he posted earlier this week that companies consider using wireless broadband in addition to cable or DSL service to enable remote working from a range of locations. He said that a remote office can be set up using wireless 3G technology.

Some adapters come with built-in Wi-Fi, which provides another potential connection mode, if the person is near a Wi-Fi hotspot. Jones also suggests that companies set up these smaller home-based networks across several geographic areas and networks in case one access network becomes overloaded. And for people outside wireless broadband coverage there's always satellite, he said.

Companies should also look for ways to use mobile devices, such as sending a copy of the disaster or contingency plan to employee phones and maybe using video phone calls as a substitute for in-person meetings, he said.

And finally, he suggests that companies have everyone's mobile number handy to contact them in the case of an emergency.

For companies that already have contingency plans in place, he says that they need to halt all other activities and direct all their resources to activating their plans. He suggests testing home networks of critical employees to make sure they are working. He also suggests talking with vendors to see their level of preparedness.

"This is not a snow day," he said. "Companies need to review their plans and find their weaknesses and gaps readiness. And then they need to fill them immediately."

For companies that do not have a plan in place already, McGee says they need to be aware of hotspots where the virus is already infecting people, and they should be preparing to set up home networks and possibly shut down their offices in those regions.

"If they haven't prepared for this up until this point, there isn't much they can do in terms of getting support from vendors or communications providers," he said. "They're just too late for that."

As for Sprint, Davis says the company has already planned how it can offload functions to other offices and call centers throughout the country depending on where the outbreak is occurring. She also said that the company is well-prepared for many of its employees to work remotely.

"We are a mobile wireless communications company," she said. "So a lot of our employees are already mobile and working remotely."