(CNN) -- An online map showing where swine flu -- or H1N1 virus-- is spreading has gone viral, so to speak. 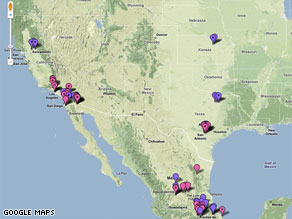 Henry Niman's map has been an online hit, tracking the spread of swine flu.

Created as a side project by Henry Niman, a Pittsburgh-based biochemist, it's attracting considerable attention despite being imperfect and not being backed by an official agency.

It's not the only H1N1-tracking map getting attention.

With people wanting to "see" the flu's progress and official organizations not meeting that desire, the vacuum has been quickly filled by several unofficial, often amateur, online maps taking a number of different approaches, as documented partly by the blog Google Maps Mania.

But Niman's map in particular seems to have gained a lot of attention. Unexpected publicity has helped. Australian newspaper The Age and The Chicago Tribune are among the Web sites that have linked to it.

Many blogs have wrongly described it as a map from Google. Niman says it is simply a map that he created using the free Google maps service.

On Niman's map, as on some others, geographic markers with different colors and characteristics (like a dot or no dot in the center) indicate where occurrences of the flu have been reported by the media, both international and local.

A marker with a dot means the occurrence of the flu was non-fatal. A yellow marker indicates a reported occurrence that turned out to be negative; a pink one indicates a suspected case; a purple one, a case that is reportedly confirmed or probable. Clicking on a marker brings up an info box with a few more details on the case, such as how many people died.

To create the map, Niman says he primarily used media articles from around the world, often supplied by map visitors posting comments.

For foreign language articles, he used Google's translation site to try to ferret out details, especially precise geographic location. He tried get more detailed, for instance, than maps that show only cases by state, going instead down to a town or even building level if possible.

Among the challenges for Niman and others trying to make such maps is that local media reports might be incomplete or have conflicting information. Indeed, despite all Niman's efforts, using the map isn't entirely satisfying. In some cases, multiple markers repeat the same information. And since the map isn't produced by an official government agency, it may be hard to have complete confidence in the information, which needs to be clearly sourced.

For official information on the swine flu, of course, people should turn to the Center for Disease Control (CDC) in Atlanta, USA and the World Health Organization (WHO) in Geneva, both of which keep the public informed in a variety of ways both online and off.

The WHO has an updated H1N1 virus web page where visitors can also subscribe to RSS feeds. On the CDC's related page, visitors can choose among e-mail, RSS, and Twitter updates.

The WHO doesn't make a map like Niman's partly for technical reasons. It needs to communicate effectively around the world, and online interactive maps are difficult to use in developing countries without high-speed Internet connections, notes WHO spokesperson Lina Tucker Reinders.

Niman has been creating online maps to help with his research since 2005, when he was tracking avian flu cases. About five years ago Niman founded a small firm called Recombinomics. The company's goal, Niman says, is to license patent-pending technology that predicts vaccine targets and drug resistance.

Along those lines, Niman tracks flu viruses and tries to predict how they will mutate as they spread. The general idea, he says, is to be able to anticipate how a virus will emerge so that the most effective vaccine can be prepared ahead of time.

"What I'm really looking at is how the virus is evolving," he told CNN. The map, he said, was "just kind of a side project to see how far and wide" the virus was spreading.

As the popularity of his map and others has shown, he's not the only one.