Big Bang machine detectors will be 'even more perfect'

(CNN) -- On a recent episode of "South Park," Mr. Marsh steals a particle accelerator magnet so his son, Stan, can win the Pinewood Derby. The magnet's power results in an alien encounter, and chaos ensues. 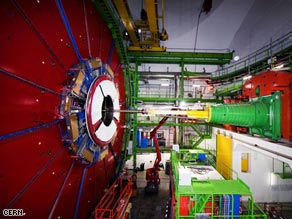 The Compact Muon Solenoid, shown here in December, is one of six experiments inside the collider complex.

While the magnets at the real-life Large Hadron Collider may not reach extraterrestrials, scientists hope they will help lead to encounters with never-before-seen phenomena and answers to fundamental questions about the universe.

The collider, the world's most powerful particle accelerator, is being repaired after an electrical failure in September. Once it is fixed, the collider will circulate beams of particles with unprecedented energy. When these particles crash into each other, the resulting activity may help scientists figure out why the submicroscopic stuff that makes up our universe behaves the way it does.

The Large Hadron Collider will start receiving current again in July, and will circulate this year's first proton beam by the end of September, said Lyn Evans, former project leader for the collider who is currently involved with the machine's repairs. The collider is located more than 300 feet below the French-Swiss border at CERN, the European Organization for Nuclear Research.

Scientists have been improving two of the main experiments, called ATLAS and CMS, by taking advantage of cosmic rays, which naturally occur and contain the same high-energy particles that will be used when the collider restarts. This has helped experts better align and calibrate the detectors.

"They'll be even more perfect than before," said Bob Cousins, deputy to the scientific leader of the CMS experiment.

ATLAS and CMS were designed to carry out their full physics programs with some parts that don't function properly, Cousins said. With the delay, scientists have been able to fix more of that small percentage that did not work.

Learn more about the six experiments »

"The excitement's building in a similar way that it was a year ago, and, in fact, everybody is working hard to be even more ready than we were a year ago," Cousins said.

Enthusiasm for the Large Hadron Collider built last summer as the world anticipated the startup of the colossal machine, which will re-create conditions of the universe shortly after it was created in the Big Bang so scientists can study how the universe evolved.

Interest grew as rumors circulated on the Internet that the collider's power would generate a black hole which would swallow the Earth. These rumors were widely discredited by the scientific community. CERN scientists released a report explaining that any black hole created would be tiny, and would not have enough energy to stick around very long before dissolving.

Scientists and skeptics alike eagerly awaited the circulation of the first proton beam around the 17-mile tunnel, which happened successfully on September 10.

But just days after this success, disaster struck. While about 9,999 out of 10,000 electrical connections between magnets in the accelerator worked well, one did not, which "made a mess of the magnets," said Joseph Lykken, theoretical physicist at the Fermi National Accelerator Laboratory, who works on CMS.

Repairing the collider costs about 40 million Swiss francs (nearly $35 million), although that's a pittance compared with the overall cost of the collider and its construction (nearly $10 billion), Evans said. The project has not been affected by the worldwide economic recession, he said.

Currently there are about 20 or 30 people in the tunnel welding, conducting electrical tests, and otherwise repairing, Evans said.

For an accelerator of this magnitude -- CMS has twice as much iron as the Eiffel Tower -- the problems in September were "typical growing pains," Lykken said. Given that thousands of parts have to work together under extreme conditions of high power, "it's a wonder that these things work at all," he said.

"Somehow they have managed to get thousands of gigantic magnets, get them arranged so that they're within a few microns of where they're supposed to be, and then cool it down to a couple degrees above absolute zero," Lykken said.

One of the mysteries scientists seek to uncover at the Large Hadron Collider is the existence of the Higgs boson, sometimes called the "God particle" because, if real, it would help explain the origin of mass. Finding evidence of this elusive particle will likely take two to three years, he said. Read about a young scientist testing theories at the accelerator

"It is the thing that gives a being to all the other particles," Evans said.

While the particles that scientists hope to find are not visible to the naked eye, the detectors are designed to find evidence of them. Cousins likens this to a Geiger counter, used to detect radiation even though it cannot be seen.

The reach of the Large Hadron Collider project extends beyond the complex itself. CMS alone requires about 100,000 computers worldwide, linked together in a network, Lykken said.

With thousands of scientists around the globe working on it, the Large Hadron Collider is also an opportunity for young physicists, even undergraduate students, to participate in the frontiers of research. Students can work at the CERN headquarters through programs such as the Summer Undergraduate Research Experience, and participate in the information exchange at the Open Science Grid.

"It is young people that do the nuts and bolts of these experiments," Lykken said. "For people like me, who have been waiting 20 years for a supercollider, it's amazing to see kids just coming into the field. By this fall, they'll be looking at what we've been waiting for all our lives."

Xiaohang Quan, a Princeton University senior, said her research could improve the way in which CMS chooses which data to record and which to throw away. Christopher Tully, her physics professor at Princeton who works on CMS, said she "came with up with an improvement that we're working on implementing."

"If further studies related to the discovery goes well, it will save people much time and trouble I hope," Quan said.