(CNN) -- Earth Day may fall later this week, but as far as former NASA astronaut Edgar Mitchell and other UFO enthusiasts are concerned, the real story is happening elsewhere. 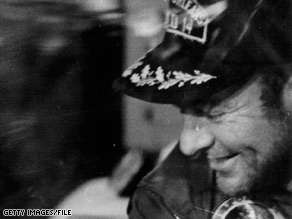 Astronaut Edgar Mitchell, shown after his Apollo mission in 1971, claims there "is no doubt we are being visited."

Mitchell, who was part of the 1971 Apollo 14 moon mission, asserted Monday that extraterrestrial life exists, and that the truth is being concealed by the U.S. and other governments.

He delivered his remarks during an appearance at the National Press Club following the conclusion of the fifth annual X-Conference, a meeting of UFO activists and researchers studying the possibility of alien life forms.

Mankind has long wondered if we're "alone in the universe. [But] only in our period do we really have evidence. No, we're not alone," Mitchell said.

"Our destiny, in my opinion, and we might as well get started with it, is [to] become a part of the planetary community. ... We should be ready to reach out beyond our planet and beyond our solar system to find out what is really going on out there."

Mitchell grew up in Roswell, New Mexico, which some UFO believers maintain was the site of a UFO crash in 1947. He said residents of his hometown "had been hushed and told not to talk about their experience by military authorities." They had been warned of "dire consequences" if they did so.

But, he claimed, they "didn't want to go to the grave with their story. They wanted to tell somebody reliable. And being a local boy and having been to the moon, they considered me reliable enough to whisper in my ear their particular story."

Roughly 10 years ago, Mitchell claimed, he was finally given an appointment at Pentagon to discuss what he had been told.

An unnamed admiral working for the Joint Chiefs of Staff promised to uncover the truth behind the Roswell story, Mitchell said. The stories of a UFO crash "were confirmed," but the admiral was then denied access when he "tried to get into the inner workings of that process."

"I urge those who are doubtful: Read the books, read the lore, start to understand what has really been going on. Because there really is no doubt we are being visited," he said.

"The universe that we live in is much more wondrous, exciting, complex and far-reaching than we were ever able to know up to this point in time."

A NASA spokesman denied any cover-up.

"NASA does not track UFOs. NASA is not involved in any sort of cover-up about alien life on this planet or anywhere else -- period," Michael Cabbage said Monday.

Debates have continued about what happened at Roswell. The U.S. Air Force said in 1994 that wreckage recovered there in 1947 was most likely from a balloon-launched classified government project.

Stephen Bassett, head of the Paradigm Research Group (PRG), which hosted the X-Conference, said that the truth about extraterrestrial life is being suppressed because it is politically explosive.

"There is a third rail [in American politics], and that is the UFO question. It is many magnitudes more radioactive than Social Security ever dreamed to be," Bassett said.

All About UFOs and Alien Abductions • Roswell (New Mexico) • NASA