(CNN) -- One evening last winter, Mike Harris was watching his local TV news when he saw a segment that caught his attention: Parents were using software to monitor their kids' cell phones. 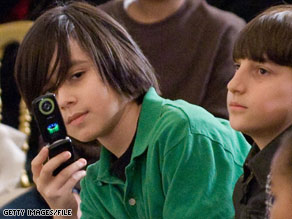 As more kids carry cell phones, some parents use software to monitor their calls and texts.

Harris, an investigator for the Child Sex Internet Investigations Unit in Jefferson County, Colorado, thought the service could be a new tool for combating sexual predators.

Equipping his phone with the software, Harris posed as an underage child on social-networking sites and began luring pedophiles. He immediately got results. Since then, Harris has made 83 arrests of alleged sexual predators -- 44 of them with the help of the monitoring program.

"It makes life easy for me as an investigator. It saves me hours of time, which obviously means I have more time to go out and catch offenders," he said. The software also documents text messages and other data that can be used in court, he said. "Now all I have to do is go into the account and pull everything out that was done between that sex offender and me."

Programs such as My Mobile Watchdog and Mobile Spy are becoming increasingly popular with parents as more school-age children are carrying cell phones.

Parents say the services help them protect their kids against predators and also reduce "sexting," the growing practice of using mobile phones to share sexually explicit text messages and pictures. In 2008, Jessica Logan, a Cincinnati, Ohio, teen, hanged herself after her nude photo, meant for her boyfriend, was sent to teenagers at several high schools, exposing her to ridicule and taunts.

The monitoring programs work like this: Once a child's phone is equipped with the software, the parent or law enforcement officer creates a list of contacts -- close relatives, trusted friends -- who are authorized to communicate with the minor's phone.

Parents pay a monthly fee -- about $10 -- for the service, which only works on so-called "smart phones" with Web access. My Mobile Watchdog also will alert parents if their child has removed the software from their phone.

eAgency Mobile Solutions of Newport Beach, California, is the creator of My Mobile Watchdog. Bob Lotter, the company's CEO, said he never imagined the software would become a tool for authorities cracking down on online sexual predators.

"The threat is huge," Lotter said. "There are so many different ways out there for child predators [to find victims] -- through Google, Yahoo, MySpace, Facebook and a host of other sites."

A Lakewood, Colorado, woman said she outfitted her 12-year-old daughter's phone with monitoring software after the girl was sexually assaulted by a man she met on MocoSpace, a mobile chat network.

"I wasn't going to take away her cell phone, and I knew I had to do something," said the woman, whose first name is Wendy. CNN.com is not printing her last name in accordance with its policy of not identifying the victims of sexual assault.

Wendy said the service has given her more peace of mind and her daughter a greater awareness of the responsibilities of having a cell phone.

Other parents haven't been so transparent. James Green of Sulphur, Louisiana, equipped his daughter's cell phone with monitoring software but didn't tell her what it was. He told her the icon was a GPS system.

"I wasn't going to get my 15-year-old a cell phone and not know how she was using it," Green said. Over time, Green found the software wasn't just useful for tracking his daughter's behavior; it also helped him discover more about the nature of his child.

"It's good to know how she's treating people and how others are treating her," Green said. "I think it's a caring father that wants to know what's going on in her life ... wanting to know how she feels."

When Green's daughter discovered the software on her phone, she wasn't angry, he said. "She understood that I cared about her."

"We talk a lot more about what's going on in her life," said Trisha, who requested her last name not be published. "It's really opened up communication between the two of us."

Some privacy advocates might object to parents digitally eavesdropping on their kids without their children's consent. But an Asheville, North Carolina, mother, who fitted her son's phone with the software without his knowledge, disagrees.

"I monitor my employees at the workplace," said the woman, who owns a small business and asked that her name not be disclosed. "And this is my son. So to me it's not like I'm wiretapping him. Besides, privacy in my house is earned."

All About Cellular Phones • Sexual Offenses