LOS ANGELES, California (CNN) -- There is a "maker's movement" gaining prominence on a global scale. 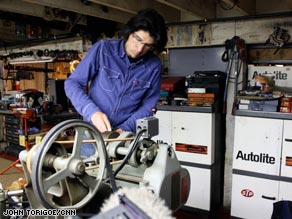 Mister Jalopy works out of converted hot-rod repair shop. This is where he builds "the stuff of my dreams."

One of its pied pipers is a man known by his pen name, Mister Jalopy. His agenda is simple. "You need to be able to modify, hack, repair, rebuild and reuse the stuff that you buy."

Mister Jalopy's name comes from a blog he started years ago.

From his Web site:

"When I started the Hooptyrides blog, I pictured a modest used car lot of broken-down, flat-tired junkers that represented great promise and little else. Lit with strings of bare light bulbs, I dreamed of a little desert lot of plucky automobiles and a faded neon sign that erratically blinked 'Mister Jalopy's Hooptyrides.' "

Mister Jalopy owns a laundromat and a used-bicycle store, and he operates out of a converted hot-rod repair shop along an industrial strip of land in the shadow of Interstate 5.

He calls his workshop "Hooptyrides World Headquarters." "It's my personal shop where I do my writing, think up my crackpot business schemes, repair bicycles and do my auto maintenance ... where I build the stuff of my dreams."

It's brimming with high-quality tools, odds and ends from 20 years of harvesting garage sales, and machines like a lathe and welder that would delight a working tradesman.

He created the "world's largest iPod." It's housed in a 1950s record console that can now digitize his music off the turntable, and the original buttons control the iPod. He also made an "urban guerrilla movie theater" -- a handmade movie projector sitting on an adult tricycle.

His used-bike shop, Coco's Variety, is named after one of his two dogs. "The credo of my store is 'Faded champions reborn for another chance at glory.' "

He adds: "These old bikes, already manufactured, [are] tenderly brought back to life for someone to love anew. The best bike for the environment is one that already exists. Not one made fresh."

Mister Jalopy goes to garage sales every week. "Some of my favorite stuff ... are the things that were made or worn by human hands. There's an incredible feeling of soul."

His most treasured find? "It was a lowly glass Skippy jar filled with all of the earthly treasures of a kid from the '50s." There was a chunky eraser, toy soldiers, and caps for a cap gun.

Mister Jalopy has a practical approach to saving the environment and surviving in a downturn economy. "The hands-off era is over. We were seduced by low prices. Our landfills are filled with cheap plastic fans, broken vacuum cleaners. We're feeling the crunch economically. Maybe this stuff should be repairable."

Dale Dougherty is the creator of Make magazine, which is at the core of the movement. "We live in a complex world. I wanted to make a magazine to showcase innovation and ideas around the world ... even in Third World countries."

Make magazine sponsors the annual Maker Faire in Northern California. More than 500 exhibitors will showcase their ideas and innovations on the last weekend in May. Families are a big part of their business. "There are no famous rock bands or stunts to bring people in," Dougherty says. Last year 65,000 people attended.

Mister Jalopy will be there hosting the main stage.

"There's this amazing community of people that are makers: carpenters, fabricators, mechanics, electronics repair people, designers of products, garden designers ... that's the great thing about the maker movement. It is passionate individuals willing to make mistakes and build the stuff of our dreams."

Mister Jalopy tinkers with a dusty jukebox given to him by a friend. He presses selection "D5." The electronics strain to move the parts that pull a 45 onto the needle. Elton John's "Bennie and the Jets" warbles along. The speakers grind out the tune. As the song ends, the needle arm unexpectedly skips to another disc.

"Uh ... oh, these old machines are fascinating. There's a visceral quality. It seems like I'm chasing a ghost through the machine."