BETHESDA, Maryland (CNN) -- Josh Winston is a self-described problem solver. From his spacious office on the seventh floor of a high-rise building in Bethesda, Maryland, he fills out tax returns and keeps the books balanced for a number of his accounting clients. 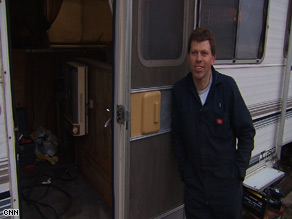 Josh Winston stands outside the 1983 RV he was converting to run on vegetable oil.

Four years ago, Winston was watching a late-night news program and saw a segment about converting diesel vehicles to run on alternative fuels. That night, Winston was hooked. He ordered a conversion kit for $900 and proceeded to convert a truck to run on used vegetable oil -- just to see if he could.

Soon after, he converted his 1998 Jetta and affixed a sticker to the rear bumper that said, "This vehicle runs on straight vegetable oil."

"For a single bumper sticker, I was surprised at how many people stopped me and said, 'Hey, how do you do that?' "

Before taking on his first conversion, he hadn't worked on a car since his 1978 Plymouth Volare -- which he drove in college.

By Winston's estimate, there are fewer than 10,000 vehicles on the road that have undergone these diesel conversions. Now, he sells and installs his own kits -- and he's the only person in the Washington, D.C., area to offer the service.

Though his side business, named "Feed My Wheels dot com," has only converted a handful of vehicles, he recently took on his largest project by far -- a 1983 Itasca RV.

"There's a lot of trial and error," says Winston.

Watch the "problem solver" at work »

Over the course of two days, Winston ran into many a problem. First, the batteries kept dying. Later, there was an issue with the alternator. By the end of Day 2, as Winston was preparing to fill a 40-gallon veggie-oil tank in the RV with recycled oil from a Chinese food restaurant, a neighbor watching him tipped over an 80-gallon holding tank, spilling tens of gallons of brown, smelly oil down his street.

After nearly 50 hours of cutting and reattaching hoses, Winston managed to get the RV running and successfully switched over to the vegetable oil tank. He claims that veggie-oil emissions are about half of those of petroleum-based diesel fuel.

"If you're emitting half the carbon dioxide that our neighbor is, that means one of two things: Either your neighbor can drive twice as much, or you're having a significant positive impact on the environment," Winston says. "In some small way, we're contributing to saving the environment. It's going to save a glacier somewhere."