(CNN) -- Ashton Kutcher has challenged CNN to a popularity contest on the social media site Twitter. 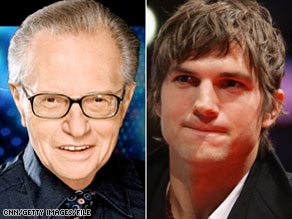 CNN and Ashton Kutcher are racing for 1 million followers on Twitter.

The celebrity and the news network are racing to get 1 million followers on the micro-blogging site, where users post 140-character messages.

Kutcher challenged CNN to the race with a Web video posted on Tuesday. If he wins, Kutcher says he will "ding-dong ditch" CNN founder Ted Turner's house.

"I found it astonishing that one person can actually have as big of a voice online as what an entire media company can on Twitter," Kutcher says in a video, which was shot from inside a car and was posted on Qik.com.

"So I just thought that was just kind of an amazing comment on the state of our media, and I said that, if I beat CNN to 1 million viewers, then I would ding-dong ditch Ted Turner -- because I don't think it's gonna happen."

As of Wednesday afternoon, Kutcher's Twitter account had 896,947 followers, putting him in third place in the number of followers. Britney Spears was in second with about 905,640 followers, and CNN's breaking news account was watched by 937,787 people on the site.

CNN's breaking-news feed on Twitter was launched three years ago by James Cox, a British web developer, as a way to get CNN news alerts on his mobile phone, said CNN spokeswoman Jennifer Martin.

In a development unrelated to Kutcher's challenge, CNN acquired the rights to the Twitter account from Cox this week, said Martin, who would not disclose terms of the deal.

"We've been working closely with [Cox] for the past two years," Martin said. "It's a good example of how a large media company can partner with its audience in innovative ways."

An information technology consultant in Croatia who is interested in the outcome of the contest has been tracking the rate of new followers for CNN and Kutcher. Marin Purgar says Kutcher will beat CNN to the 1 million follower mark before 4 p.m. ET on Thursday.

CNN will hit the 1 million mark by 1 p.m. ET on Friday, based on Purgar's projection, which assumes the rate of new followers for the past 20 minutes will continue, he said by phone Wednesday. Purgar said he will continue to post updates to the data on his Twitter account.

Kutcher has been posting like mad to his account since challenging CNN to the battle. The celebrity -- known for the TV shows "Punk'd" and "That 70s Show," as well as for being married to actress Demi Moore -- has offered to give his millionth follower a copy of the video game "Guitar Hero."

He also says on Twitter he will donate 10,000 mosquito bed nets to charity for World Malaria Day in late April if he beats CNN, and 1,000 if he loses. CNN has agreed to do the same, Martin said.

In a video message that aired on CNN's "Larry King Live," the talk show host grinned as he accepted Kutcher's challenge.

King also teased Kutcher about his threat to ring Ted Turner's doorbell and then run away, noting that Turner formerly ran CNN and is not directly associated with the network today.

Kutcher responded to the video on his Twitter account with this post: "ok larry king is now one of my new favorite people and this means war lets go tweeps."

King has invited Kutcher to appear on his show, "Larry King Live." Kutcher, saying "this is a saga for the Internet," asked King to come on his "twit show" to settle things.

The battle has gained much attention on Twitter, with fans pulling for both sides.

Some online writers on Wednesday said the goofy race may be a real symbol of what's to come for Twitter.

If Kutcher wins the race with CNN, Siegler said, it may indicate a symbolic shift toward personalities dominating the site. iReport.com: Twitter, Facebook growing pains?

"When Twitter started out, it seemed like its most practical usage would be doing stuff like breaking news," Siegler said by phone. "There was all the earthquake news, all the fire news ... that made it pretty interesting to a lot of people. But now, obviously, Twitter's gone to the whole next level with all the news coverage and all the celebrities who are starting to use it."

Kutcher may seek popularity, but he seems genuinely interested in interacting with his followers, which is a key to success on the site, Siegler said.

The battle highlights another Twitter trend: celebrities using their accounts to pump up charities and causes, not just their own fame. Kutcher may help charities fight malaria if he beats CNN, and actor Hugh Jackman posted this note on his Twitter account Tuesday, indicating he will donate $100,000 to a fan's favorite charity:

"I will donate 100K to one individual's favorite non profit organization. Of course, you must convince me why by using 140 characters or less."

So far, Jackman has received Twitter responses from people interested in combating poverty, water shortages and anti-gay discrimination, among other causes.

Andrew Cherwenka, a Huffington Post contributor and Web developer at Trapeze.com, said celebrities are starting to realize they can use their large Twitter followings to enact social change.

"He's got a lot of people listening to him," he said of Kutcher. "What's he saying?"