(CNN) -- Video nominees for the 13th annual Webby awards, which honor excellence on the Internet, have a decidedly political flavor -- reflecting a year dominated by a historic presidential election. 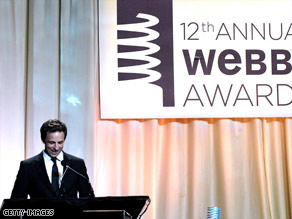 Among the nominated videos announced Tuesday were Sarah Palin parodies, a fake Paris Hilton for President ad, Sarah Silverman's "The Great Schlep" and a "Prop 8 -- The Musical" spoof starring Jack Black as Jesus.

Established in 1996, the Webbys are presented by the International Academy of Digital Arts and Sciences, a 550-member body of Web experts, business figures and celebrities -- including such diverse figures as musicians Beck and "The Simpsons" creator Matt Groening.

Fans have until April 30 to vote for their favorites at the Webby People's Voice site. Winners will be announced May 5, with the trophies handed out June 8 at an event in New York City hosted by "Saturday Night Live's" Seth Meyers.

The gala will showcase the Webby's famous five-word acceptance speeches. Past high-profile speechmakers included Al Gore ("Please don't recount this vote") and Stephen Colbert ("Me. Me. Me. Me. Me.")