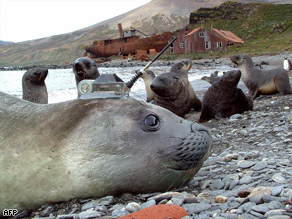 An elephant seal with a custom-designed electronic tag. The tags fell off when the animals molted.

The fourth IPY, which began in March 2007 and actually covered two full years, ended last month, after 160 scientific projects were undertaken by researchers from over 60 countries.

A joint project by the International Council for Science (ICSW) and World Meteorological Organization. (WMO), the IPY hoped to spearhead efforts to better monitor and understand the Arctic and Antarctic regions. The project had international funding of about US$ 1.2 billion over the two-year period.

"The International Polar Year 2007/2008 came at a crossroads for the planet's future," said Michel Jarraud, Secretary-General of WMO in a press statement. "The new evidence resulting from polar research will strengthen the scientific basis on which we build future actions."

Researchers found that in the Arctic during the summers of 2007 and 2008, the minimum extent of year-round sea ice decreased to its lowest level since satellite records began 30 years ago.

According to a report published by the IPY organizing committee in February, their research indicates that global warming is affecting Antarctica in ways not previously identified.

Other evidence of climate change came from IPY research vessels that found warming waters in the Southern Ocean and an increase in melting ice that is creating fresher bottom water around the coast of Antarctica.

Among efforts to study the effects of climate change on Antarctica, was aNorwegian Polar Institute project to study marine mammals. Custom-designed tags were attached to elephant seals to study the animals' habits, although researcher realized the tags could also help with field research on climate change.

The electronic tags -- which fell off when the seals molted -- sent back data on temperature and salinity the oceans around Antarctica, particularly around the Fimbul Ice Shelf in east Antarctica.

While ice-shelf melt has been recorded in the west of Antarctica, scientists are concerned that it could happen in the east as well.

Another project to study the underside of an Antarctic glacier deployed an autonomous robot submarine. The team from the U.S. and British Antarctic Survey sent the "Autosub" on six missions to study the Pine Island Glacier and how changes in ocean temperature were affecting the West Antarctic Ice Sheet.

Using sonar, the submarine picked its way around the glacier and sent back data that created three-dimensional maps that scientists used to determine where and how the warmth of the ocean waters was melting the glacier's base.

"If [the West Antarctic Ice Sheet] were to melt completely, global sea levels would rise by as much as 5 meters," said Stan Jacobs, the U.S. lead scientist on the project.

"Because so little is known about ice-sheet behavior, this research will take us a step further in understanding how ice sheets will contribute to sea-level rise."