WASHINGTON (CNN) -- The Supreme Court has passed up a chance to examine how far states can go to restrict unsolicited e-mails in efforts to block spammers from bombarding computer users. 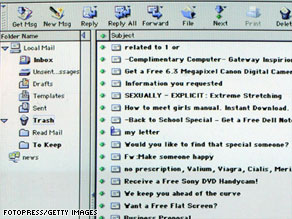 A tough anti-spam law will not be reviewed by the Supreme Court, the court said Monday.

The high court without comment Monday rejected Virginia's appeal to keep its Computer Crimes Act in place. It was one of the toughest laws of its kind in the nation, the only one to ban noncommercial -- as well as commercial -- spam e-mail to consumers in that state.

The justices' refusal to intervene also means the conviction of prolific commercial spammer Jeremy Jaynes will not be reinstated.

His 2004 felony conviction was the first in the United States for sending bulk unsolicited electronic messages.

A Virginia jury found Jaynes used several computers and servers to send as many as 24,000 spam e-mails in one day to America Online subscribers. He used false "header" info and sender domain names, according to court records. A search of his Raleigh, North Carolina, home found CDs with more than 176 million e-mail addresses and 1.3 billion e-mail user names, some of them stolen by a former AOL employee.

Jaynes was sentenced to nine years in prison, but the state high court eventually reversed the conviction. The state justices said the law was overbroad because some bulk e-mails might contain political, religious, or other speech that has traditionally been given higher First Amendment protection than typical "commercial speech."

The U.S. Supreme Court was asked to weigh whether such anti-spam laws overreach into protected speech.

Despite the ruling, Jaynes remains behind bars because of a federal securities fraud conviction unrelated to the state spamming charges.