(CNN) -- What he lacks in technique, Steve Wozniak makes up for in geeks. 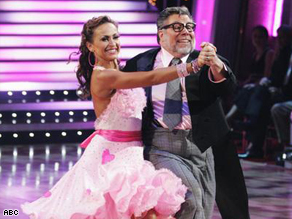 Apple Inc. co-founder Steve Wozniak and his partner show off their moves on "Dancing With the Stars."

The Apple Inc. co-founder has managed to transform his less-than-graceful moves on ABC's "Dancing With the Stars" into enough votes to keep hope alive on the competitive ballroom-dance show.

"Woz," as he is known by friends and fans alike, and partner Katarina Smirnoff have had some of the lowest scores from the trio of judges since the show premiered on March 9.

But the judges, who are experts in the field of competitive dance, aren't the only deciding factor.

Viewers can vote online, via phone calls or by text messaging, and those votes comprise 50 percent of each couple's score. The dance team with the lowest combined score is then voted off the show -- a fate that may await Wozniak on Tuesday night.

Wozniak and Smirnoff are up against a bevy of entertainers, including an Olympian, an NFL Hall of Famer, the most successful female rapper in hip-hop history and an actor whose claim to fame is appearing naked in the film "Sex and the City."

But all that star power has so far been matched by the power of computer geeks who are using what they know best to keep the rhythmically challenged Silicon Valley icon in the game.

Harrington -- who began rallying the techie troops almost as soon as ABC announced that Wozniak would be competing -- said he is rooting for the philanthropist because "he puts more heart and more passion in what he's doing than some of the other dancers."

"When you have beautiful athletes, movie stars and TV personalities, and then you mix in a geek, there's something a little strange and entertaining," Harrington said. "Being a fellow geek myself, I thought now is the time to work with the technologies that we know and start pushing for the vote."

That means lots and lots of social networking to spread the love -- and the word of Woz.

Joe Patane is a longtime friend of Wozniak's and one of the officers for the official "Vote for Woz on ABC's 'Dancing With the Stars' " Facebook group.

Patane shares his friend's passion for philanthropy and runs his own foundation and the site joesworld.org. He also knows a bit about reality television.

A former cast member of MTV's "The Real World: Miami," Patane was instrumental in convincing his bud to sign on to the show and said the lovable (though some might argue lumbering) Wozniak has garnered fans both young and old.

"He loves his fans, and he's completely flattered by the fan response," Patane said. "He's a shy guy, and he's doing a crazy, unique and different thing in his life that he wants to share with the world."

Patane, who is also executive producer of the documentary "Camp Woz: The Admirable Lunacy of Philanthropy," said he enjoys watching his friend dance each week.

"He's the most uniquely giving, loving, happy man," Patane said. "With so many people watching this show, it's a good, infectious way to spread love, joy and hope."

Aaron Petrey of Stanford, Kentucky, is one viewer who has fully embraced the Wozniak mania.

He won an autographed copy of the book "iWoz" for submitting a video of himself imitating Wozniak's dance moves to VoteWoz.com.

Petrey said it's only natural that fans of Woz would turn to the Internet to support him.

Unfortunately, the "Dancing With the Stars" judges don't seem to feel the same way.

Despite dancing through injuries -- including a pulled hamstring that sent him to the hospital in an ambulance last week -- Wozniak failed to impress the experts Monday night.

While he did manage to score a perfect 10, it was a collective 10 out of a possible 30. At one point during Wozniak's and Smirnoff's samba, judge Bruno Tonioli put his face in his hands.

Wozniak capped their routine by doing his version of the break-dance move known as "the worm," but even that failed to save his lackluster performance.

"At some point the novelty wears off," said judge Carrie Ann Inaba, often cited as the kindest of the three.

Wozniak, who beat out former Go-Go's lead singer Belinda Carlisle after a dance-off in an earlier round, kept his smile throughout the storm of criticism.

"I enjoy it," he said on the show afterward. "I'm going to try to bring my form of entertainment to the world."