(CNN) -- Comedian Stephen Colbert, who tried to get on the ballot of the South Carolina presidential primaries, aimed higher and won this time. 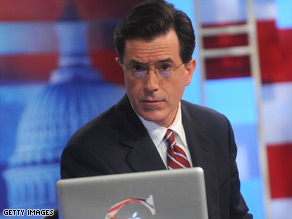 Comedian Steven Colbert's name could go on a new wing of the International Space Station.

Fans of "The Colbert Report" made "Colbert" the No. 1 submission in a NASA contest to name a new wing of the international space station.

Still, NASA reserves the right to name the wing of the space station and says it will not make a final decision on the matter until next month.

"Colbert" pulled in 230,539 of the more than 1.1 million submissions in the contest, according to NASA spokesman John Yembrick.

Watch how Colbert urged his viewers to vote »

NASA's suggestion for the wing, "Serenity," came in second, with slightly more than 190,000 votes, he said.

Yembrick said NASA had not yet decided what to name Node 3 -- a connecting module and its cupola -- that will be installed on the space station.

He said NASA would likely put "Colbert" a "little higher" in the space agency's consideration because of the high number of submissions but emphasized that the decision would likely not be made until next month.

The contest rules say NASA reserves the right to "ultimately select a name in accordance with the best interests of the agency. ... Such name may not necessarily be one which is on the list of voted-on candidate names."

Other rooms on the space station are named Unity, Harmony and Destiny.

Colbert fans, lovingly called the Colbert Nation, have in the past bombarded polls to have things named after their idol.

Thanks to them, the comedian out-polled every other name in a bridge-naming contest in Hungary. The country's government later said they cannot name the bridge after him because he did not speak Hungarian and was not deceased.

But ice-cream makers Ben and Jerry's named a new flavor in honor of him, calling it Colbert's AmeriCone Dream. And Virgin America named one of its planes Air Colbert.