(CNN) -- A piece of debris zipping by at astronomical speed forced the crew of the international space station to take shelter in its escape capsule Thursday, a rare close call for the orbiting platform, NASA said. 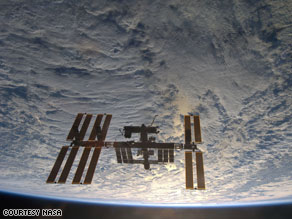 Debris passed close by the international space station Thursday, and its crew moved to an escape craft.

The object -- about 5 inches across, and moving at nearly 20,000 mph -- passed within 3 miles (4.5 km) of the station early Thursday afternoon, the U.S. space agency reported. The near miss forced the three-member crew into the Soyuz return ship for about 10 minutes, NASA spokesman Kelly Humphries told CNN.

The chunk of metal came from a satellite rocket motor used on an earlier space mission, NASA said.

The North American Aerospace Defense Command warned mission controllers about the object Wednesday night, too late to take evasive action, Humphries said. In previous instances, controllers have been able to maneuver the station out of the way of a threatening piece of space junk -- "but because of the late notice, we didn't have time to coordinate that," he said.

Watch as Humphries describes the scare »

"They're getting back out of the Soyuz and reactivating all the station systems so they can get back to normal duties," Humphries said.

The station has had to dodge a possible collision eight times in the eight years it has been occupied, Humphries said. Another NASA spokesman, Josh Byerly, said crews have had to seek shelter aboard the Soyuz "lifeboats" on several previous occasions.

The Soyuz is the workhorse of the Russian space program, and one has been kept at the station for use as a possible lifeboat in case of emergency. Construction on the international space station's orbital platform began in 1998, and it has had astronauts aboard since 2000.

CNN's John Zarrella and Kim Segal contributed to this report.