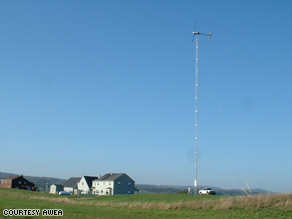 This 10-kilowatt, 120-foot-tall small wind turbine could fulfill the electricity needs of this household.

The bill provides a 30 percent investment tax credit to consumers who buy these turbines, which are typically used to help power homes or small businesses.

Even amid a recession, this tax credit "is going to blow the top off the market," said Ron Stimmel, a "small-wind" advocate with the American Wind Energy Association.

The association predicts the federal subsidy could help the small-turbine market grow by 40 to 50 percent annually, a boost that would parallel the growth of the U.S. solar photovoltaic industry after a similar 2005 initiative.

Unlike the towering windmills sprouting en masse from the Western Plains, small wind turbines have a capacity of 100 kilowatts or less and are designed to operate on the consumer side of the power grid, often in combination with solar panels.

How do small wind turbines work? »

According to the American Wind Energy Association, the United States is already the world's leading manufacturer of small-wind technologies, holding roughly two-thirds of the world's market share. Last year, American companies made 98 percent of the small wind turbines sold in the United States.

To conservation-minded home or business owners, the turbines are an investment in clean energy and one way to ease America's dependence on foreign oil. In the right location, a 10-kilowatt turbine could supply the entire electricity needs of an average American household. The newly subsidized larger models can help power small businesses, farms and schools.

The wind industry is governed by the laws of physics. The higher the wind speed, the faster the turbine spins and the more electricity is produced. Because the output of a wind turbine also tends to increase proportionally with its distance from barriers such as trees or buildings, the most productive -- and cost-effective -- turbines sit atop tall towers erected on an acre or more of open land.

Despite this rule of thumb, there is a burgeoning movement to bring small-wind power to cities as well.

"It is true that doing wind in urban environments is a lot trickier than in rural environments," said Johanna Partin, San Francisco's Renewable Energy Program manager, who also coordinates the task force. "But the reason you rarely see [turbines in cities] may be that we just haven't figured out how to do it yet."

New York City Mayor Michael Bloomberg made headlines last August when he proposed installing wind turbines atop city bridges and skyscrapers. He later backtracked, saying he wasn't sure the project was feasible.

"When you get down around a house, or in and amongst a lot of trees, or around buildings, the wind resource is seriously compromised," said Mick Sagrillo, founder of Sagrillo Power and Light, a renewable energy consultancy firm.

"All of the data that we've seen that's come out of any reporting or testing ... backs that up," said Sagrillo, a 29-year veteran of the field.

"There are pockets of usable wind in cities," he says, "but they're very hard to find, and they're a lot more limited than you might think. It is most often not worth the time and expense."

There are also zoning regulations and permitting requirements in many cities that pose serious challenges to wind installations. Most experts say that city dwellers should focus their energy conservation efforts on other renewable technologies or home efficiency improvements.

San Francisco entrepreneur Todd Pelman has founded a small start-up company called Blue Green Pacific, which produces a corkscrew-shaped, roof-mounted turbine that is still in the development phase. Pelman hopes to produce competitive amounts of electricity by capturing slower, more erratic winds, such as those blowing between tall buildings or across roofs.

He has an uphill struggle. Less than one percent of the 10,000 small wind turbines sold last year in the United States were of Pelman's rooftop variety.

For Pelman, harnessing the wind is more about environmentalism than profit.

"[If] the technology makes sense on a philosophical level, which ours will, then it is, at the very least, worthy," he said in an e-mail interview. "It should help us to recognize our involvement with materialism, energy and community."

All About Alternative Energy Technology