(CNN) -- With its energy-gobbling casinos, Atlantic City, New Jersey, isn't exactly known as a city that conserves electricity. Its motto: "Always turned on." 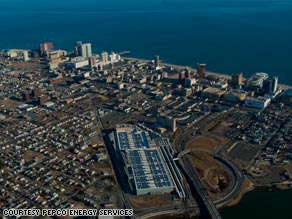 Atlantic City's convention center, in the lower center of this photo, has the largest solar-paneled roof in the U.S.

This oceanside gambling mecca seems an unlikely place for a pioneering solar energy project. But at a ceremony scheduled for Thursday, city and state officials commemorated the city's convention center, newly powered in part by the largest single-roof solar-panel array in the United States.

The 13,321 photovoltaic panels will produce an average of 26 percent of the convention center's energy, according to consultants. The panels cover most of the roof's usable space, leaving room for walkways and other equipment.

"We estimate that we are going to save $4.4 million over the 20 years of the contract [with the solar provider]," said Jeff Vasser, president of the Atlantic City Convention & Visitors Authority.

In greener terms, authorities estimate the solar panels will avoid the release of 2,349 tons of carbon dioxide into the atmosphere -- equivalent to removing 390 passenger vehicles from the road or reducing oil consumption by 4,956 barrels per year.

"This is something we started thinking about when Gov. [Jon] Corzine came out with his energy master plan," Vasser said. "We thought, looking at our roof, that we would have a perfect opportunity to take the lead for New Jersey."

When the Atlantic City Convention and Visitor's Authority received its electric bill in January, there was a significant difference from the year before. Despite relatively short days and weak winter sunlight, the panels produced 15 percent of the convention's center's power.

Corzine's energy plan for the state went into effect in October. One of its five goals is: "Invest in innovative clean-energy technologies and businesses to stimulate the industry's growth in New Jersey."

The governor has played in key part in inspiring businesses to look at solar options, Vasser said.

The convention authority didn't set out to have the largest solar setup on one roof. The group had been thinking for several years of ways to be greener and to save money, Vasser said. It became apparent as they talked to consultants that the bigger the solar array, the better.

Vasser sees convention centers as ideal places for solar arrays. They are big, boxy buildings with a lot of empty space on their mostly open, flat roofs. He thinks adding solar power should be an easy decision as long as the roof has good exposure to the sun.

The hardest choice, he said, was picking the most cost-effective way to add panels to the 500,000-square foot building.

Another factor that made the agreement more attractive was that as a public entity, the convention center is not eligible for federal tax credits. As a private company, Pepco is.

Pepco, which provides electricity from a variety of traditional and green sources, believes solar power is an important part of the nation's future.

"I think it's going to do a lot for reducing our dependence on oil and will have all kinds of positive effects, not only on geopolitics but on the cost of the energy in this country," said David Weiss, president and COO of Pepco. "[Solar] plants like this are what are going to make it happen."

One of the advantages about having solar panels on buildings is that you use a free source of energy to produce power where it is being used, said Tom Hunton, CEO of American Capital Energy, the subcontractor on the project. When electricity is generated at a coal or nuclear plant, some of it disappears as it travels through transmission lines to homes and businesses.

But, despite the fact that there have been many engineering and manufacturing improvements to solar panels over the past 50 years, solar energy is still too expensive for mass use, he said. "But eventually solar power will be a major source of power in the United States. It's just a matter of time."

"There's a lot of neon and bright lights here, but I think everyone is conscious of saving energy and being conscious of our environment," he said.