(CNET) -- Republican politicians on Thursday called for a sweeping new federal law that would require all Internet providers and operators of millions of Wi-Fi access points, even hotels, local coffee shops, and home users, to keep records about users for two years to aid police investigations. 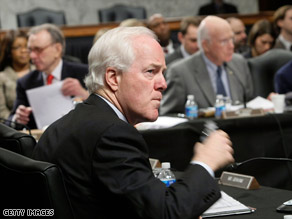 U.S. Sen. John Cornyn of Texas, supporter of a bill that would require Internet user records to be saved for police.

The legislation, which echoes a measure proposed by one of their Democratic colleagues three years ago, would impose unprecedented data retention requirements on a broad swath of Internet access providers and is certain to draw fire from businesses and privacy advocates.

"While the Internet has generated many positive changes in the way we communicate and do business, its limitless nature offers anonymity that has opened the door to criminals looking to harm innocent children," U.S. Sen. John Cornyn, a Texas Republican, said at a press conference on Thursday.

Joining Cornyn was Texas Rep. Lamar Smith, the senior Republican on the House Judiciary Committee, and Texas Attorney General Greg Abbott, who said such a measure would let "law enforcement stay ahead of the criminals."

Two bills have been introduced so far--S.436 in the Senate and H.R.1076 in the House. Each of the companion bills is titled "Internet Stopping Adults Facilitating the Exploitation of Today's Youth Act," or Internet Safety Act.

Each contains the same language: "A provider of an electronic communication service or remote computing service shall retain for a period of at least two years all records or other information pertaining to the identity of a user of a temporarily assigned network address the service assigns to that user."

Translated, the Internet Safety Act applies not just to AT&T, Comcast, Verizon, and so on--but also to the tens of millions of homes with Wi-Fi access points or wired routers that use the standard method of dynamically assigning temporary addresses. (That method is called Dynamic Host Configuration Protocol, or DHCP.)

"Everyone has to keep such information," says Albert Gidari, a partner at the Perkins Coie law firm in Seattle who specializes in this area of electronic privacy law.

That sweeps in not just public Wi-Fi access points, but password-protected ones too, and applies to individuals, small businesses, large corporations, libraries, schools, universities, and even government agencies. Voice over IP services may be covered too.

Under the Internet Safety Act, all of those would have to keep logs for at least two years. It "covers every employer that uses DHCP for its network," Gidari said. "It covers Aircell on airplanes-- hose little pico cells will have to store a lot of data for those in-the-air Internet users."

In the Bush administration, Attorney General Alberto Gonzales had called for a very similar proposal, saying that subscriber information and network data should be logged for two years.

Until Gonzales' remarks in 2006, the Bush administration had generally opposed laws requiring data retention, saying it had "serious reservations" about them. But after the European Parliament approved such a requirement for Internet, telephone and VoIP providers, top administration officials began talking about the practice more favorably.

After Gonzales left the Justice Department, the political will for data retention legislation seemed to ebb for a time, but then FBI Director Robert Mueller resumed lobbying efforts last spring.

This tends to be a bipartisan sentiment: Attorney General Eric Holder, a Democrat, said in 1999 that "certain data must be retained by ISPs for reasonable periods of time so that it can be accessible to law enforcement." Rep. John Conyers, the Democratic chairman of the House Judiciary Committee, said that FBI proposals for data retention legislation "would be most welcome."

Smith, who sponsored the House version of the Internet Safety Act, had previously introduced a one-year requirement as part of a law-and-order agenda in 2007.

A 1996 federal law called the Electronic Communication Transactional Records Act regulates data preservation. It requires Internet providers to retain any "record" in their possession for 90 days "upon the request of a governmental entity."

Because Internet addresses remain a relatively scarce commodity, ISPs tend to allocate them to customers from a pool based on whether a computer is in use at the time. (Two standard techniques used are the Dynamic Host Configuration Protocol and Point-to-Point Protocol over Ethernet.)

In addition, Internet providers are required by another federal law to report child pornography sightings to the National Center for Missing and Exploited Children, which is in turn charged with forwarding that report to the appropriate police agency.

The Internet Safety Act is broader than just data retention. Other portions add criminal penalties to other child pornography-related offenses, increase penalties for sexual exploitation of minors, and give the FBI an extra $30 million for the "Innocent Images National Initiative."