MOSCOW, Russia (CNN) -- Two satellites, one Russian and one American, have collided some 800 kilometers (500 miles) above Siberia, the Russian and U.S. space agencies, said Thursday. 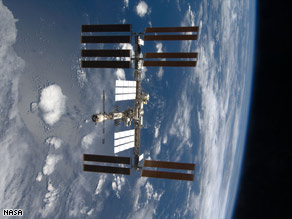 Debris from the collision poses no threat to the International Space Station.

That debris is not believed to pose a threat to the International Space Station as long as the clouds continue moving in a lower orbit, according to NASA and the Russian federal space agency, Roscosmos.

"There is some elevated risk, but it is considered to be very small to the ISS and to the other satellites that NASA has in orbit," NASA spokeswoman Beth Dickey told CNN. She said experts were still assessing the effects of the debris.

Mikhail Martirosov, from Russian mission control center, told Interfax news agency that the real threat from the debris will become obvious next week, once experts can calculate the trajectory of the fragments' descent.

The Russian satellite was launched in 1993 and had been out of service at the time of the collision, Roscosmos said.

The U.S. satellite was part of the Iridium global mobile communications system and is owned by a consortium headed by Motorola, the space agency said. It was launched in 1997.

Iridium said in a statement Wednesday it "expects to implement a network solution by Friday," and will "move one of its in-orbit spare satellites into the network constellation to permanently replace the lost satellite" within the next 30 days.

CNN is "one of the larger non-government users" of Iridium, said Arnie Christianson, operations manager for CNN Satellites and Transmission.

"We do rely on it for communication in high-risk areas like Iraq, Afghanistan, and other remote locations," he said.

"Because of this collision, there may be a slightly longer hole in the coverage from one satellite to the next, but only in a very small area and for a very small amount of time. This is a collision, not an internal failure of the satellite or the system."

The satellite crash may result in "brief, occasional outages" that may slightly disrupt service, Iridium said in the statement, adding "this event is not the result of a failure on the part of Iridium or its technology."

Christianson questioned how U.S. government, which tracks all space junk larger than a football, didn't see this coming. But he said the system will continue to work without any noticeable problems.

A representative of Iridium could not immediately be reached for comment.

NASA's Dickey said a collision like this one is very rare.

"This is the first impact between two intact satellites traveling at hypervelocity," she said. "There have been some other occasions when things have accidentally collided in space, but they have been parts of rockets or parts of satellites and (produced) a very small cloud."

Major Regina Winchester, of the U.S. Strategic Command, said: "Space is getting pretty crowded. The fact that this hasn't happened before -- maybe we were getting a little bit lucky."

"Any time there's an event that creates more debris, it's a concern," she said. "All countries who have assets in space are going to be concerned simply because when there's more debris, there's a higher chance it's going to hit something."

All About NASA • Russia