(CNN) -- When Corey Wynsma's wife got laid off a few months ago from her graphic design job, the couple did an inventory of their household budget. 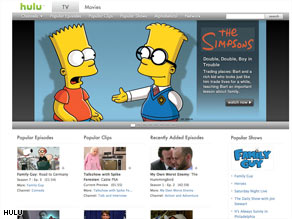 Users watched more than 24 million videos on Hulu.com in December, a record for the fledgling company.

Cable TV seemed like an obvious luxury. So the couple, who live in Grand Rapids, Michigan, canceled their cable service and found another way to keep up with their favorite shows: on the Internet.

"We were already consuming a good portion of content online, and a quick survey of media sites allowed us to determine if those shows we were most interested in watching could be found online," Corey Wynsma said. "In almost each case, the answer was yes."

Rick Wampler, a technician for Cirque du Soleil in Orlando, Florida, came to the same realization when he dropped his cable subscription three months ago. Cost was a major factor, and Wampler wanted more control over the services he was paying for, he said.

As more Americans get used to watching video on their computers, more Web sites are popping up to offer free movies and TV shows. Consumers are taking advantage of this to eliminate cable or satellite TV and integrate their home entertainment with the Web. And online video viewership is skyrocketing.

How to watch TV on the Internet »

Internet users in the United States watched a record 14.3 billion online videos in December, an increase of 13 percent over the previous month, according to comScore, an Internet marketing research firm. Popular site YouTube led the growth charge, accounting for almost half the incremental gain in videos viewed.

Internet TV services such as Hulu, Joost and Veoh also are feeding off a new generation of tech-savvy users in search of cheap access to video content. Add to the mix players such as Netflix -- whose Roku set-top box offers more than 12,000 streaming videos and who is teaming with LG Electronics to embed new TVs with the service -- and there's enough online TV options to justify a subscription-free lifestyle.

Web TV content remains limited, however. Although Joost and Hulu might show your favorite ABC reality series or reruns of "The Simpsons," the sites won't be streaming NFL playoff games or new episodes of hit shows such as "Entourage."

For people used to a large TV with surround sound, watching movies on an 11-inch computer screen could be an unsatisfying viewing experience. And technical problems persist.

Wampler, the Cirque du Soleil technician, had trouble keeping up with the presidential election results on his computer in November.

"It was difficult to watch the presidential votes come in" because the live streams on several news sites were jerky and intermittent, he said. "Since I am on a cable modem service, my download speed is dependent on how many other people are also on the Internet at the same time."

Ronald Lewis, a Denver, Colorado-based technology adviser, believes that most Americans aren't prepared to watch TV on their computers.

"Broadband adoption is still ongoing in America, which means there are many people without access to the pipes, which will drive these [Internet TV] services," he said.

"Many consumers aren't interested in consuming long-form video services on their PCs. They expect a TV-like experience. Except for the tech-savvy and resourceful among us, it's not widely accessible."

The brutal economy may motivate some consumers, like the Wynsmas, to switch to Web-based TV, but it won't necessarily hurt the cable or satellite TV business, which has historically been recession-proof.

"Consumers continue to find their TV sets a reliable and comforting companion in difficult times," said Robert Mercer, a spokesman for DirecTV. Mercer said the satellite TV service showed strong customer growth and low disconnects through the third quarter of last year, and he expected that trend to continue through early 2009 despite the economic climate.

"The cable companies have invested billions of dollars to expand the footprint and reach of their services, and it will require a similar investment by the [Internet Protocol Television] players to catch up," said Lewis, the technology consultant.

"The IPTV players are in a great position to wage an all-out war for eyeballs over the next six to 10 years," he added. "The future of TV is definitely IP, but it will take some time to get there." iReport.com: Are you watching more TV online?

Data show that increasing numbers of people relying on the Internet for at least some of their TV viewing. Users watched more than 24 million videos on Hulu in December, a record for the fledgling company. And Joost users viewed 818,000 hours of video in January, up 25 percent from the previous month, a spokesman said.

"We embrace the online world as much as the offline world," said Mary Nell Westbrook, senior director of consumer communications for Comcast.

But one thing is certain: The landscape is shifting. And Internet TV services believe that time is on their side.

"The Internet as a TV provider is in its infancy," said Mike Volpi, CEO of Joost. "We believe that [in the future,] the majority of TV will be viewed over the Internet. It's mostly cost, but it's also convenience. People want to be able to travel and move about while watching TV."