How to watch Obama's inauguration online

(CNET) -- More than 2 million Americans lost their jobs last year, the stock market fell by almost 45 percent from its peak, and comparisons with the Great Depression are becoming disturbingly commonplace. 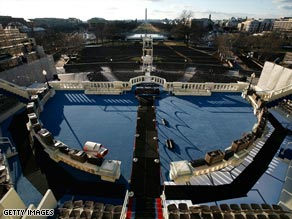 But that isn't stopping Washington from throwing a $160 million party, the most lavish ever, for Barack Obama's presidential inauguration on Tuesday.

Technology companies are joining the festivities by hosting a number of inaugural parties, and a collection of news and other Web sites are aiming to let anyone who can't be in the nation's capital--or who doesn't want to brave probably-freezing temperatures--follow along online.

• The Joint Congressional Committee on Inaugural Ceremonies, which is in charge of all the inaugural activities at the Capitol, will stream the entire event at its Web site, complete with closed captioning. The site has a wealth of information about what happens on Inauguration Day, including a handful of inaugural videos dating back to President Dwight Eisenhower's 1957 swearing-in ceremony, as well as videos of presidential luncheons dating back to the inauguration of John Kennedy. (It also reveals, for those interested, the recipe for Obama's luncheon meal, which features a main course of pheasant and duck served with sour cherry chutney.)

• Our sister site CBS News will have day-long live coverage January 20 on TV and the Web, starting at 7 a.m. EDT. Katie Couric will also host a special Webcast that night with reporters and punditry, for which viewers can submit questions.

• MSNBC will be live streaming the event on its home page and politics section, and visitors can embed the video into their own sites. Its inauguration page also features videos of inaugurations from decades past.

• Fox News will provide live streaming coverage via Hulu beginning at noon for about two hours. After the live stream, Hulu will provide on-demand access to the ceremony. The live stream is embeddable, as is an inauguration countdown from Hulu. The video site's Obama Presidency page also features related content like speeches, commentary, satire, and past inaugural speeches.

• C-SPAN will debut its Inauguration Hub on January 20, featuring an online "control room"--a multichannel grid designed by Mogulus with Webcasts of inauguration activities. Visitors will be able to choose from one of four live feeds featuring events like the swearing in at the Capitol, the parade, and a number of inaugural balls.

• CNN is partnering with Facebook to provide live streaming of the swearing in and Obama's speech. Viewers can "RSVP" for the event on Facebook, and as they watch, they will be able to provide status updates with their thoughts on the events. A Facebook window on the CNN.com Live channel will show viewers their friends' relevant status updates.

• Current TV and Twitter are teaming up, as they did during the election, to add real-time tweets to Current's broadcast and Webcast of the swearing in, which starts at 11:30 a.m. EDT and will be replayed throughout the day.

Once Obama is sworn in, he'll be party hopping through Washington that night. The Presidential Inauguration Committee has promised to Webcast some of the official inaugural balls--though there are plenty of unofficial parties, including some hosted by tech companies.

The Recording Industry Association of America is hosting a charity ball featuring the recording artist Rihanna and the actors David Arquette and Courteney Cox. The ball benefits the nonprofit Feeding America and is co-sponsored by Yahoo, Comcast, Oracle, AT&T, SoundExchange, Time Warner, News Corp., and a number of other companies.

Google is partnering with the Leadership Conference on Civil Rights to host "a break from traditional inaugural balls." Guests are encouraged to make donations--which Google will match--to organizations including the LCCR Education Fund, One Economy, the Sunlight Foundation, D.C. Central Kitchen, and Green For All.

The Huffington Post, the news aggregation and commentary site, is hosting a pre-inaugural ball Monday night with the Atlantic Philanthropies and the Musk Foundation, which supports research on renewable energy, human space exploration, and pediatrics. The event is also receiving sponsorship from MySpace, Comcast, the wind power company Vestas, and the nonprofit Global Green USA, among others.

The party, they say, is "to celebrate change in Washington, the rise of new media, and a renewed commitment to service and the environment," and features a performance by Will.i.am.

Plenty of other parties will be celebrating a renewed commitment to the environment, including the Green Inaugural Ball, chaired by Al Gore and hosted by a number of organizations like the American Council on Renewable Energy, the Energy Action Coalition, and the Vote Solar Initiative.