(CNN) -- As the first president-elect with a Facebook page and a YouTube channel, Barack Obama is poised to use the Internet to communicate directly with Americans in a way unknown to previous presidents. 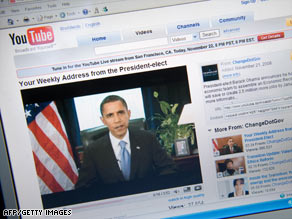 Since the election, President-elect Barack Obama has posted weekly video addresses on YouTube.

Judging by Obama's savvy use of social-networking sites during his campaign and the interactive nature of his transition team's Web site, Americans can expect a president who bypasses the traditional media's filters while reaching out to citizens for input, observers say.

"The rebooting of our democracy has begun," said Andrew Rasiej, founder of Personal Democracy Forum and the techPresident blog. "[Obama] has the potential to transform the relationship between the American public and their democracy."

During the presidential race, Obama's campaign won praise for its innovative use of social-networking sites, including Facebook, MySpace and MyBarackObama.com, to announce events, rally volunteers and raise money. Facebook has more than 150 million active users, and the average user has 100 friends on the site, according to the company. iReport.com: Your chance to ask President-elect Obama a question

Obama has more than 1 million MySpace "friends" and more than 3.7 million "supporters" on his official Facebook page -- some 700,000 more than when he was elected in November. His campaign also has a database of almost 13 million supporters and their e-mail addresses.

Transition officials hope to transform Obama's vast Web operation and electronic list of supporters into a 21st-century tool to help accomplish his goals as president. They even have a name for this ambitious effort: Obama 2.0.

"Obama has invented an alternative media model," said CNN senior political analyst Bill Schneider. "In the old model, the president talks to the people on television [and] the people talk back in polls. In the new model, communication is online, and two-way."

Facebook, MySpace, YouTube and Twitter didn't exist when George W. Bush took office eight years ago. But since last November's election, Obama has wasted no time embracing these online communication portals. In recent weeks he has taped weekly video addresses and posted them to YouTube, where most have been viewed hundreds of thousands of times.

Obama's staffers also have stopped posting information to social-networking sites since the election, preferring to reach out to constituents through YouTube and Change.gov, the official site of the president-elect's transition team. Visitors to Change.gov can read a frequently updated blog, post their ideas on issues facing the country, and rate others' ideas. Top-rated ideas will be gathered into a briefing book and given to Obama after he takes office.

"They want information going not just from them to the voters, but from the voters back to them," Democratic strategist Steve McMahon said Wednesday on CNN's "The Situation Room." "Thirteen million people pushing a button, sending an e-mail to their elected representatives, making a phone call, taking action, is a powerful, powerful lobbying tool."

"It's a very smart use of the Internet, to get people to offer ideas," said David All, a Republican Internet strategist. All hopes that Obama and his staff take a similar approach to WhiteHouse.gov, the president's official Web site. The current WhiteHouse.gov site, operated by the Bush administration, contains few interactive features.

A statement on the president-elect's transition site says that Obama hopes to "use cutting-edge technologies to create a new level of transparency, accountability, and participation for America's citizens."

It's fitting, then, that Obama's inauguration next week could be one of the most watched video events in Internet history. Rasiej expects that hordes of users will be watching online when Obama takes the oath of office, visiting WhiteHouse.gov and refreshing their browsers to capture the moment the site switches to proclaim Obama, not George W. Bush, as president.

As president, Obama will likely not just rely on WhiteHouse.gov but use multiple Internet sites and technological tools to build grass-roots support for his agenda, observers say.

"[Obama] is using the tools that are available to him today," All told CNN. "The next president will be using some of the same tools, and also some tools that haven't been invented yet."