PHILADELPHIA, Pennsylvania (CNN) -- Shoppers who listen closely as they approach Franklin Mills Mall in Philadelphia, Pennsylvania, can hear the sounds of gunfire from inside. But it's nothing to worry about. 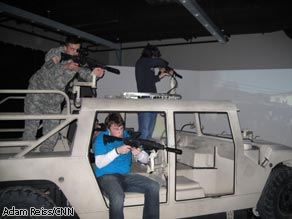 The noise is coming from a 14,500-square-foot unit tucked in next to the Banana Republic and Victoria's Secret shops -- the Army Experience Center, a state-of-the-art facility with a Humvee, a Black Hawk helicopter and an Apache gunship.

The facility, the only one of its kind in the nation, represents a $12 million, two-year experiment by the Army to boost recruiting numbers.

The two 19-year-olds said they like the upscale feel of the center and the fact that the recruiters were not pushy when they came to inquire.

"It helps them recruit people, but it doesn't force them," Elmore said. "You come to play games, and your eye starts to wonder what the Army does have to offer, and maybe it's something for me."

The Philadelphia area has proven difficult for Army recruiters, they said, and they hope this center will increase enlistment.

The center and its 22 recruiters replaced five smaller recruitment offices in the area. Four months into the experiment, the center has signed up 37 full-time soldiers and five reservists.

The new marketing approach includes 60 computers and 19 Xbox games for a hands-on, virtual reality experience that youth of all ages can participate in. Some come just to play games after school.

"They have all these kids in here that are 13, 14, 15 years old," said new recruit Brett Verbich, who signed up to be a Black Hawk mechanic. "They get more exposed to it now because, you know, they are not going to walk into a regular recruiting station at 14 years old thinking about going into the Army."

Join John Roberts and Kiran Chetry for "the most news in the morning."
Weekdays at 6am ET.

Maj. Larry Dillard, a program manager based at the Pentagon, has been intimately involved with the creation of the center. One of its goals, he said, is to help overcome misconceptions about the Army.

"You can get all of your questions answered, and in the Army experience center you're not going to get a pushy, hard sell," he said. "I mean, we really just want people to understand the Army. If you come in and decide the Army's not for you, but you leave understanding the Army better, then from our perspective that's success."

As the U.S. wages wars in Iraq and Afghanistan, the Army has been looking at new approaches to attracting soldiers since a dismal recruiting year in 2005. Other steps have included increasing bonuses, hiring more recruiters and easing some standards.

High unemployment tends to be good for Army recruiting, so the latest downturn also has helped sign up more people. The Army surpassed its goal of 80,000 recruits in the fiscal year that ended September 30.