CES and the recession: What was the impact?

LAS VEGAS, Nevada (CNET) -- There are probably a lot of different ways to measure how the deepening recession has impacted the Consumer Electronics Show, but in Sin City, it stands to reason that one of the best is how much business the local strip clubs are getting. 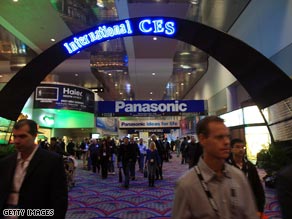 About 110,000 people came to the Consumer Electronics Show, an almost 22 percent drop from last year.

In an entirely unscientific survey, then, my conclusion is that CES was hit hard by the downturn, at least if the experience of one local taxi driver is any indication.

"We taxi drivers, we've got a thing with the strip clubs, where we get a kickback...so it's big money if we can get the guys to go to the strip clubs," said Darryl, a 54-year-old cab driver who asked that his last name not be used.

"I went to the clubs (during CES), thinking maybe I could get some guys to take them back to their hotels, but I didn't have any luck. And a friend, he was hoping to get some strip club rides, since they pay us $50 a head, and he didn't have any luck...They weren't going out of their way to spend money like they normally would, for that extra type of entertainment."

Actually, it's been very hard to judge the effect of the recession on this show, which in the past has been one of the largest in the world. Ask five different CES veterans what they thought, and you get five very different answers.

But over the course of the four days I've been in town, some patterns have emerged, and in the end, I'd say that while CES was still packed with attendees and exhibitors spread over the full breadth of the mammoth Las Vegas Convention Center and the Sands Expo and Convention Center, there were noticeably far fewer people here than in past years.

"There's way less than in 2007," said Don Sherstobitoff, the owner of Okanagan Home Theaters, and a four-year CES veteran. "I was walking around (Las Vegas) and it feels pretty much like a ghost town."

I've never enjoyed being at CES, and one reason is that during the show, it is impossible to get around Las Vegas. In the past, the lines for taxis, either at the major hotels or the convention centers, have been horrendous -- easily an hour long -- and once you finally got in one, you'd be trapped in bumper-to-bumper traffic for easily as long, even for a short ride.

This year, however, the general consensus is that getting around has been, while not exactly fluid, then at least easier, and quicker.

"It's been (just) a half-hour wait for a taxi anywhere," said Sherstobitoff.

As I was writing this story, in fact, I walked to the taxi line by the convention center's south hall, to head to the airport to go home, and literally hopped in a cab with zero waiting -- just an hour before the show closed down for the day on Saturday.

Clearly, the taxi economy has been a buyer's market this year. At the convention center, cabs are backed up nearly as far as the eye can see, even as the lines seem demonstrably shorter than in years past.

And that may be, several taxi drivers told me, because of what now seems to have been a rather large miscalculation as to how many cabs Vegas would need on the streets during CES.

"The idiots at the taxi commission put enough cabs on the street for 147,000 people," one 50-something white-haired cabbie told me, "when they knew there's only half that many. It's not even worth it to come to work."

And another cabbie suggested that after the taxi companies struck major deals for advertising on the signage on top of the cars, they decided not to pull many of the vehicles off the street even when it became clear CES attendance would be down.

So how many people actually showed up?

During the show, Tara Dunion, the senior director of communications for the Consumer Electronics Association, which puts on CES, said that 130,000 people were anticipated, just 11,000 less than the 141,000 who came last year.

But in a press release issued late Sunday night titled, "2009 International CES electrifies and elicits optimism for global economy," the CEA said its preliminary results showed that just 110,000 people showed up. That is 31,000 less than last year, a hefty 21.9 percent drop.

Yet in its release, the CEA professed to being pleased with how things went.

"At its meeting on the third day of CES," the release stated, "the 45 members of the CEA Board of Industry Leaders, which includes top executives from large and small manufacturers and retailers, reported to CEA staff that the 2009 International CES succeeded beyond all expectations and that CEA should strive to restrict future attendance to 2009 attendance levels."

Perhaps the CEA's happy face comes from its assessment of the number of companies that showed up exhibit. In the release, it touted the "more than 2,700 global companies, including 300 new exhibitors, (who) unveiled an estimated 20,000 new technology products across 1.7 million net square feet of exhibit space this week...(and helped) lead the way to economic recovery."

Still, the CEA's admission that attendance was down more than 21 percent--which was buried in the eighth paragraph of the press release, validates much of the on-the-ground assessment of what it was like by people who were at the show.

"It's a little less cloggy, in terms of trying to get through the halls," said Stephen Cass, a senior editor for Discover magazine. "You don't feel people pressing in on you so much...Literally, you feel a little less pressure from the crowd."

Cass, who's been to CES four of the last five years, said that all the big companies were here -- the Panasonics, Sonys, and Toshibas of the world -- but that for many smaller outfits, the emphasis this year might well have been more on value proposition than on new glitzy features.

"It's the other side of Moore's Law," Cass said. "This year, people are maybe looking at the 50 cents side, the economy side, of Moore's Law, rather than the performance side."

Others agree that the emphasis during the coming year in the consumer electronics business might well be on getting the most bang for buyers' bucks rather than on the feature-laden products that have been so prevalent at CES in past years.

"Honestly, I think (consumer spending on electronics) is going to be on inexpensive things," said Jed Putterman, vice president of products at Cloud Engines, "things people can get value out of."

Not everyone, though, felt that CES 2009 was all that noticeably different than the event has been in the past.

To Jeremy Toeman -- a consultant who was shepherding four different companies in CES' Innovations Showcase at the Sands -- the people who needed to be at CES, like retailers and media, were there in force.

"I don't feel that the show is really 'hit' even though people say it is," said Toeman. "Our foot traffic has been phenomenal."

Indeed, in the Innovations Showcase -- a special section of CES focusing on notable engineering and design -- the crowds were thick. And in fact, throughout CES, there were large numbers of people. Many tens of thousands of people add up, no matter how large a convention center they're spread out over, and no matter if the total population is less than in the past.

But even Toeman said that he thinks that where some companies visiting CES might have sent 20 people in previous years, they may have sent just 12 or so this year.

The real impact of the recession could well be felt next year, however, he said. That's because companies planning on exhibiting at CES 2010 had to make their decisions about booth space by this year's event.

"The big boys will be spending less money" for next year's CES, Toeman said. "I may be wrong, but if I had to make a wager, that's the wager I'd take."

Still, the gossip throughout town during CES was that the convention was markedly smaller this year. Whether it was bartenders talking to patrons, cabbies talking to passengers or reporters talking to each other, there seemed to be unanimity that the numbers, while still large by the standards of other trade shows, were way down for CES.

But the impact on the people who depend on CES for their livelihood is hard to measure.

For Darryl, the taxi driver, the show couldn't have come at a better time. He'd had such a dismal November and December due to a broad general drop in visitors to Las Vegas that he'd had his cable shut off the week before CES.

He said, however, that business had been up at least 50 percent during the show, and that he hoped that at the very least, he'd be able to get his cable turned back on.

"I'm hopeful that this is a sign of the next few months," Darryl said, "that the big conventions are back, and that the business people are going to be coming here. If it's not a big convention, there's still a lot of people coming here for business meetings. Even if it's not normal, it'll still be better than it's been the last few month, and that'll help me get back on my feet."

All About Consumer Electronics • Las Vegas