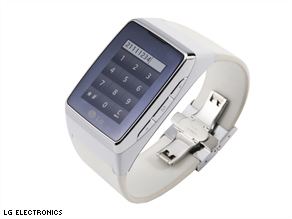 The tiny, 3G-capable LG watch phone has a 1.4-inch screen but still packs a host of features.

Some products are in stores now, although many are due later this year and a few are still in the prototype stage. Which, if any, will catch on with consumers? It's probably too soon to tell.

CNN spent several days touring the booths at CES, which ended Sunday. Here are a handful of gadgets that caught our eye:

LG Electronics made a splash in Vegas when it unveiled what it claims is the world's first market-ready touch-screen watch phone. That's right, a phone you wear on your wrist.

"You want to think James Bond, 'Get Smart,' Dick Tracy. It's all that and more," LG spokesman Martin Valdez said. "You'll never have to worry about losing your phone anymore."

The tiny, 3G-capable gadget has a 1.4-inch screen but packs a host of features such as Bluetooth, text messaging, still and video camera and a built-in speaker for playing music files.

LG hasn't decided on a wireless carrier or set a price for the watch phone, which it hopes to begin selling in Europe and the U.S. this year. But won't people feel silly talking into their wrists?

iRiver, a Korean-based company, hopes to get the device on the American market by the end of the year at a price -- probably under $400 -- that it hopes will encourage consumers to buy several units for many rooms of their home.

Smaller than a netbook and larger than a smart phone, this sleek device combines the best features of both. For one, it weighs 1.4 pounds and is small enough to fit in your coat pocket.

"It has a cool factor," Sony product manager Xavier Lauwaert said. "You go to a Starbucks and pop this out of your jacket, and people will go, 'Ooh!' "

This Vaio has built-in Bluetooth and GPS technology and runs on Verizon's 3G network, so it's connected to the Web anywhere you can get a cell-phone signal. It also features an 8-inch screen, webcam, two USB ports and a promised four hours of battery life.

This $1,999 luxury accessory doesn't have the Web-browsing ability of a smart phone, but it has style to burn. Handcrafted from stainless steel and sapphire crystal, each one takes two weeks to manufacture. The phone opens like a switchblade on Swiss-engineered gears, and its round display screen has the look of a classic watch face.

The Aura went on sale last month and contains most basic cell-phone features, but that's not what people will want it for.

"It's a piece of art," Motorola marketing Vice President Melissa Gardner said. "We're targeting it around people who really value fashion and style." And a big bank account.

If you're mourning Polaroid's recent decision to stop making film for its classic instant cameras, here's some good news. This 5-megapixel camera, due on the market in March, contains a built-in printer for producing 2-by-3-inch pictures on the go. The camera's printer contains no ink or toner; the prints pass through a thermal heat head, activating dye crystals embedded in the print paper and producing an image.

The resulting pictures are a little grainy, but they're ready in seconds and have a sticky-back feature for scrapbooking. And, unlike your old Polaroid, you can review the image on the camera's LCD screen before deciding whether to print it.

"It's not going to replace your 12-megapixel camera," Polaroid marketing associate Michael Holmes said. "It's fun. It's convenient."

A finalist in a "Last Gadget Standing" competition at CES on Saturday, this writing implement is a pen and a computer in one. Thanks to an infrared camera near the pen's tip and special paper with microdots that track the pen's movement, the Pulse can digitally capture handwritten notes.

A digital recorder links the notes to audio recorded at the same time -- a lecture, for example -- while handwriting-recognition software allows users to tap anywhere in their written notes and bring up the audio that was recorded when those words were jotted down. The pen contains a USB dock that allows users to upload their notes to a laptop.

OK, so maybe the keychain part isn't that exciting. But this affordable little MP3 player aims to please with digital photo and video capability, two sets of earbuds and two headset jacks for sharing music with your loved one. Best of all, it'll play its music wirelessly through your car's stereo.

The device comes in many colors and is expected to hit stores in April or May for $59.99.

This bedside alarm clock looks ordinary enough, but it's got an unusual feature: It listens to you. Voice-recognition software lets users program the clock through simple verbal commands instead of pushing multiple buttons, which will be popular with the elderly or the technologically challenged.

"It's easy for just about anyone to set the alarm without pulling out the owner's manual," said Ron Shulda, design and product manager for Spectra, the clock's manufacturer. Shulda expects the clock to hit the market in the spring and retail for $29.99.