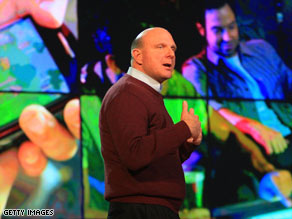 As expected, Ballmer announced that Microsoft is releasing a beta version of Windows 7, which will be available for download beginning Friday. The news suggests the world's largest software maker may be giving up efforts to rehabilitate its often-maligned Vista operating system, which was released worldwide in January 2007.

"We are on track to deliver the best version of Windows ever," Ballmer told an audience of several thousand tech professionals and journalists inside a cavernous ballroom at the Venetian hotel. "We're working hard to get it right and get it ready."

Without mentioning the security and compatibility issues that have dogged Vista, Ballmer promised that Windows 7 will make PCs faster and easier to use. He didn't offer a timetable for its official release, although Windows Vista went on sale more than two years after it was issued in beta form.

Early reviews of Windows 7, which was leaked to the Internet in beta form in late December, have been positive. iReport.com: See a review of Windows 7 and send your own

The forthcoming operating system will have touch-screen capability, side-by-side windows for comparison shopping and a "Peek" feature that makes open windows transparent, allowing users to see the icons on their desktop.

"Windows 7 makes it easier to move between the things on your desktop," said Microsoft group project manager Charlotte Jones, who gave a brief demonstration of the system on the hall's giant display screens. Jones said the new system also makes it easier to send files back and forth between home computers.

Wednesday's address marked the energetic Ballmer's debut as CES keynote pitchman, a job that had been handled for the past decade by Microsoft chairman and industry pioneer Bill Gates. Ballmer's presentation came two days after a similar, high-profile keynote at the Macworld show in San Francisco by Apple, Microsoft's chief rival, and its vice president Philip Schiller, filling in for the ailing Steve Jobs.

Unlike Schiller, Ballmer tackled the struggling economy head-on in his remarks. He said that although the recession has created "a period of reduced expectations," the tech companies that push forward now with innovative research will fare better in the long-term than the companies that scale back.

Ballmer said the convergence of screens on computers, TVs and mobile phones is revolutionizing how people communicate with each other.

"Our digital lives will continue to get richer. There's really no turning back from the connected world," he said. "We're on the verge of the kind of technological transformation that only happens once every 10 or 15 years." iReport.com: See the convergence of HD cameras with snorkel masks

As if to prove his point, Ballmer also welcomed onstage program manager Janet Galore, who gave brief demos of some Microsoft product prototypes, including a tabletop-like touch screen and a flexible, wafer-thin digital screen you can roll up like a piece of paper.

In a gentle swipe at Apple, which has gained market share against Microsoft in recent years, Ballmer said the PC remains the best choice for consumers seeking "value and power" in a computer.

"That's why we say, 'I'm a PC and proud of it!" he bellowed -- a reference to a new Microsoft ad campaign that play off similar ads by Apple. iReport.com: Will you try Windows 7? Are you attending CES?

Ballmer also announced that Microsoft has formed a partnership with Verizon Wireless to add Live Search tools to all Verizon smart phones in the U.S.

He also announced a partnership with Dell, which will soon come loaded with Microsoft's Windows Live suite of software, and links between Windows Live and the social-networking site, Facebook.

Reaction to the 90-minute presentation, which also included a performance by Australian musical-comedy trio Tripod, was mixed. Attendees praised the lively pace of Ballmer's talk, but wished he had made more news.

"I really loved what I heard tonight. There's definitely a lot of things to look forward to," said Sebastian Mineau, a Montreal-based blogger with MSN Canada. "It [Windows 7] wasn't a big surprise. But it was still nice to get the confirmation straight from the lion's mouth."

"It was very disappointing," said Ben Sillis, a reporter with ElectricPig, a British tech site. "CES is supposed to be about new products, new stuff. And this had all already been leaked. There was nothing new."

Some 2,700 exhibitors and 130,000 attendees are in Las Vegas for CES, the nation's largest consumer electronics trade show. The event runs through Sunday.