By Jimmy Wales and Andrea Weckerle
Special to CNN

Editor's note: Jimmy Wales is the founder of Wikipedia and co-founder of wikia.com. Read his blog here. Andrea Weckerle is an entrepreneur with a background in law and communications. 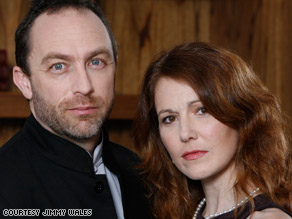 (CNN) -- The incoming Obama administration's plan to appoint the first national chief technology officer unequivocally emphasizes the new team's belief that technology isn't ancillary or extraneous to governance, and instead that it's an integral part of the effective running of a democratic superpower.

It's no wonder that the online world nearly burst with excitement upon hearing the news.

But to fully and effectively implement its mission, the CTO position must be nonpolitical and, at least initially, internally focused. Here are our recommendations for what we believe are core components of a structurally sound, technologically savvy federal government:

Ruthlessly modernize: Examine the technology used within the federal system and determine what is outdated, redundant and inadequate, then keep what works and expel what doesn't. Examine procurement polices and demand they are in line with best practices. The results of this endeavor alone will save the federal government massive amounts of money.

Create openness of information: This will serve two important functions, namely allowing people to see what the government is doing, thus fostering accountability born of transparency, and also providing access to data that will inevitably inspire and support innovation and collaboration within the private sector. In this realm, the old adage from the free software movement of "release early, release often" is quite helpful.

There are many datasets that the government could immediately release, without first having to build a Web interface or a complex infrastructure process.

The fact that such data would not be under copyright (as all works produced by the federal government are automatically in the public domain) would result in a flurry of activity.

Individuals, for-profit companies and nonprofit organizations would quickly make use of this data in innovative ways that the government would never think of on its own.

For example, President-elect Barack Obama is considering providing an unprecedented level of information about how the government is going to spend the economic stimulus money. In the current financial crisis, the government has decided to spend a huge amount of taxpayer money on bailouts and stimulus measures.

By releasing as much raw data about all these kinds of payments as possible, citizens can work together to scrutinize where the money is going and what for, making it harder for fraud to escape notice.

But this openness can receive the needed public support only if it's done within a robust framework of security and privacy -- in other words, keeping information vital for national security under lock and key, and ensuring that private information about citizens remains so, except as mandated by law -- understanding that the overarching goal is to make government freely available to all citizens.

Single sign-on across all government Web sites for citizens: When someone visits modern Web sites like google.com, wikia.com or wikipedia.org, they can create a login ID and log in one single time to access all of the individual sites' respective services, thus both simplifying and enhancing the user-friendliness of these sites.

Easy-to-implement open-ID technology clearly already exists and should immediately be adopted across all government Web sites, so that citizens only need to input a single username and password to access, and feel encouraged to frequently visit, these sites and thereby inform themselves and participate in the democratic process.

For the same reason that all government publications are automatically placed in the public domain, the federal government should make a very strong commitment to using only open-source software and open standards. The era of handing implicit subsidies to politically favored companies by adopting their closed proprietary software must end.

Create a single government-wide wiki: A wiki is a Web site that gives users the ability to edit and keep track of those edits historically. The most famous wiki, of course, is Wikipedia. But today, effective large enterprises are implementing wikis internally to allow their employees to rapidly share knowledge and disseminate information; they've realized that the time and dissemination efficiencies thereby achieved are substantial.

With a strong and proven private industry precedent upon which to rely, a single, massive government-wide wiki, created and continuously added to for the compilation of government knowledge in an organized way, will serve as a cornerstone of modern federal knowledge management.

The opinions expressed in this commentary are solely those of Jimmy Wales and Andrea Weckerle.

All About Barack Obama • Software • Internet