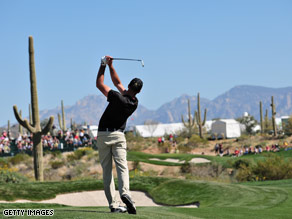 Geoff Ogilvy of Australia plays his approach shot on the ninth hole during the final round Sunday.

Ogilvy, the 2006 champion and 2007 runner-up, had a 4-up lead in the Sunday morning session after the first nine holes. In 33 holes he had 10 birdies and an eagle, securing the win.

Ogilvy earned a place in Sunday's final after beating American Stewart Cink, while Casey had won an all-English semifinal against Ross Fisher.

Cink won the third-place consolation match against Fisher, who was making his Match Play debut, 1 up.

The tournament had marked the return of world number one Tiger Woods, who crashed out in the second round Thursday to South African Tim Clark.

It was his his third World Golf Championships title, having also won last year's WGC-CA Championship and it saw him climb four places to number four in the world rankings.

Despite having also won the US Open and now only ranking behind Tiger Woods for WGC victories, Casey believes Ogilvy deserves to be thought of in the same bracket as the likes of Padraig Harrington and Vijay Singh.

"I think when Geoff plays the golf he played today, you have to put him in that category," Casey added. "Geoff is a quiet guy, maybe that's why he doesn't get the attention that he deserves or the recognition that he deserves. But he's a phenomenal golfer."

Victory took his record in the event to 17 wins and two defeats, yet Ogilvy needed prompting to acknowledge that Casey had a point about his place on the golfing ladder.

"That's not really for me to decide it's for you guys to decide where I sit in the pecking order," he said. "I think I'm a pretty decent player. I played in some pretty good tournaments.

"There's a few guys in the world who are obviously well in front of me: Tiger, Phil (Mickelson), Sergio (Garcia), Harrington.

"So there's four. So I'm at least fifth. Sergio hasn't got a major, but Sergio's won a lot of big tournaments.

"I'm in that area somewhere. Tiger, Phil, and Padraig, and then I'm in the next bunch, probably."

When told he had actually moved up to number four in the world, Ogilvy simply said: "Well, that's nice, yeah."

Asked if he was now the best match-play golfer in the world, Ogilvy admitted: "This week I probably was."