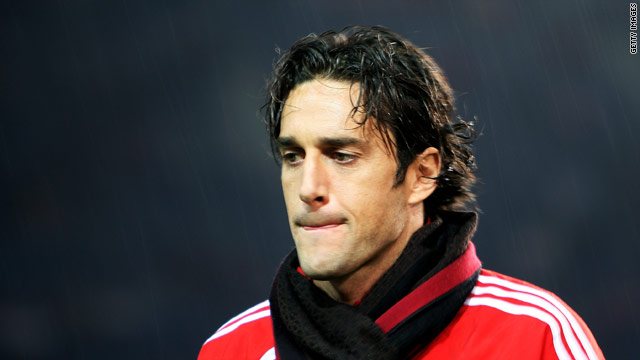 Toni has been left out in the cold under Van Gaal and now returns to Italian football.
STORY HIGHLIGHTS

(CNN) -- Bayern Munich's Luca Toni has returned to Serie A football on a six-month loan with AS Roma, confirmed on Thursday.

The 32-year-old Toni is out of favor at the German giants after falling out with coach Louis van Gaal and is desperate for first team football to further his claims for a place in the Italy side at the 2010 World Cup finals.

Toni was one of the star's of Italy's winning team in 2006 and moved to Bayern from Fiorentina the following year.

The club's official Web site www.fcbayern.de confirmed a move which had been widely predicted.

"In a discussion Luca Toni asked the board of Bayern Munich to loan him out to Roma until the end of the season for personal reasons," read a statement.

He wants, through regular games in Serie A, to still realize his main goal of taking part in the 2010 World Cup with the Italian national team
--Bayern statement on Luca Toni

"He wants, through regular games in Serie A, to still realize his main goal of taking part in the 2010 World Cup with the Italian national team."

Toni has not played for his national side since their poor showing in the Confererations Cup in South Africa in June.

The Italian club said in a statement that Toni will be with them until June 30, subject to passing a medical test.

Toni helped Bayern to a league and cup double in his first full season, but since the arrival of Dutch coach Van Gaal has slipped down the pecking order and played just three Bundesliga games this season.

He was fined by the club in November for leaving the stadium at halftime after being substituted in their disappointing 1-1 home draw with title contenders Schalke.

Toni has interested other clubs in Italy and England, but set his heart on going to the capital club to impress Italy coach Marcello Lippi.