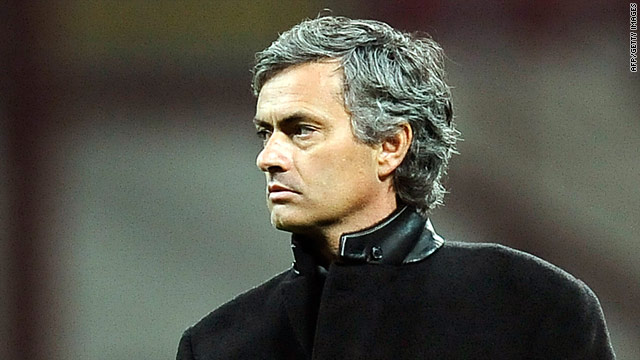 Jose Mourinho has said he did not assault a journalist after Inter Milan's 1-1 draw with Atalanta on Sunday.
STORY HIGHLIGHTS
RELATED TOPICS

(CNN) -- Inter Milan coach Jose Mourinho has claimed he did not assault a journalist after his side's 1-1 draw with Atalanta.

Mourinho had been accused of "physical and verbal aggression" towards Corriere dello Sport's Andrea Ramazzotti and had been criticized by the Italian Sport Union of Journalists (USSI).

The Portuguese coach denied hitting Ramazzotti, but did admit to a verbal spat with the reporter after the Serie A clash on Sunday.

"I don't like journalists near the team bus after a game," Mourinho said.

"I came out of the bus and I insulted him twice. But I did not try to hit him, there was no physical contact."

Mourinho did not attend the post-match press conference as he was serving a one-game touchline ban. Inter president Massimo Moratti confirmed earlier this week he would investigate the incident.

I came out of the bus and I insulted him twice. But I did not try to hit him, there was no physical contact.
--Inter coach Jose Mourinho

A previous statement from the USSI following the incident urged Inter president Massimo Moratti, and the country's governing sporting bodies to investigate.

It read: "The physical and verbal aggression of Inter coach Jose Mourinho towards our colleague Andrea Ramazzotti marks one of the lowest and alarming moments in the relations between football and sporting press.

"Mourinho was already cited, prior to the Champions League game with Rubin Kazan, for his uneducated and disrespectful tone that he used towards certain colleagues.

"This aggression marks an irresponsible and unacceptable escalation. USSI expresses not only its indignation, but a strong concern for gestures and the unspeakable behavior that only increases tensions and controversies.

"It asks president Moratti to intervene energetically so that a member of his club (Mourinho) adapts to the great tradition of civility of the club and of the Moratti family.

"It asks as well of the FIGC (Italian Football Federation) that the sporting justice panel intervenes to examine the behavior of Mourinho for eventual sanctions."