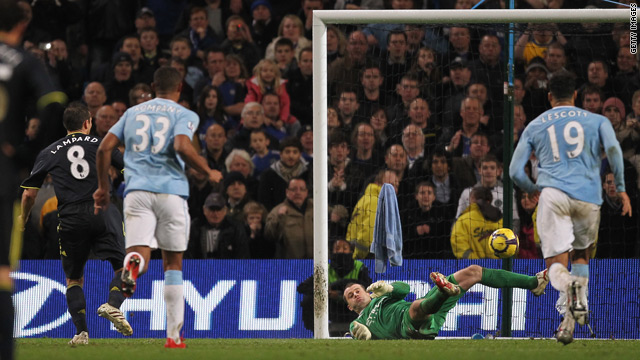 It capped a miserable week for Chelsea, who were knocked out of the League Cup by Blackburn in a penalty shootout on Wednesday.

Carlo Ancelotti's team made the perfect start when City striker Emmanuel Adebayor inadvertently put the ball in his own net in the eighth minute after goalkeeper Shay Given's save from a Nicolas Anelka shot hit him in the back and rebounded in.

Adebayor made up for that misfortune eight minutes before halftime when he fired home at the second attempt when the ball fell to him after Shaun Wright-Phillips' shot hit teammate Micah Richards, leaving Chelsea to appeal in vain for handball.

Argentina forward Carlos Tevez put the home side ahead in the 56th minute when he curled in a free-kick after being fouled by Ricardo Carvalho.

City lost England defenders Richards and Bridge to injury -- the latter stretchered off after a studs-first lunge by Juliano Bennetti -- before substitute fullback Nedum Onuoha gave Chelsea the chance to level in the 82nd minute when he brought down Ivory Coast striker Didier Drogba.

However, Given turned away England midfielder Lampard's poor spot-kick, and the visitors were unable to rally again as captain John Terry went off with a knee injury.

The England center-back is likely to miss Wednesday's Champions League tie with Apoel Nicosia, but should be fit to face Everon next weekend.

Manchester United, on the other hand, had no such worries as they continued the form that saw them brush aside Tottenham in the quarterfinals of the League Cup on Tuesday.

Veteran midfielder Paul Scholes, who has been reportedly pondering his future, lashed home his 99th Premier League goal on the stroke of halftime and then his potential young successor Darren Gibson followed up his midweek double with a similarly impressive strike in the 61st minute.

Brazilian midfielder Anderson crossed for Antonio Valencia to score the third from close range 10 minutes later, and the Ecuador winger set up England striker Wayne Rooney just 60 seconds after that.

United boss Alex Ferguson had been forced to pair England midfielder Michael Carrick with left-back Patrice Evra in the center of defense after Neville and Brown went off injured.

Rio Ferdinand and Jonny Evans are ruled out, but Ferguson hopes Serbian center-back Nemanja Vidic will recover from illness for Wednesday's Champions League trip to Wolfsburg, with United needing a point to finish top of Group B.

The defeat left Gianfranco Zola's struggling West Ham side just a point above the relegation zone.

Injury-hit Arsenal moved into third place above London rivals Tottenham, who travel to Everton on Sunday.

Arsene Wenger's team bounced back from successive 3-0 defeats by Chelsea and Manchester City, the latter in the League Cup quarterfinals in midweek, to win 2-0 at home to mid-table Stoke.

Spain midfielder Cesc Fabregas missed a penalty on his 250th appearance for the Gunners after Andriy Arshavin was tripped, but the Russia forward -- playing on his own up front in the absence of Theo Walcott, Robin van Persie, Nicklas Bendtner and Eduardo -- scored the opener from a tight angle in the 26th minute.

Arshavin had a shot deflected onto the crossbar before substitute midfielder Aaron Ramsey sealed victory with 11 minutes left, cutting into the box and sliding a shot past goalkeeper Thomas Sorensen.

Fifth-placed Aston Villa moved level with Tottenham on 26 points after winning 3-0 at home to Hull, who lost influential midfielder Jimmy Bullard to yet another knee injury.

England midfielder James Milner set up Republic of Ireland defender Richard Dunne for Villa's 13th-minute opener, then lobbed an exquisite goal from 20 yards after goalkeeper Matt Duke was caught stranded outside his area.

Substitute striker John Carew added a third from the penalty spot two minutes from time after Duke was booked for bringing down Ashley Young as Villa followed up the midweek win over Portsmouth that put Martin O'Neill's side in the semifinals of the League Cup.

Last year's runners-up Liverpool continue to struggle after being held 0-0 away to 12th-placed Blackburn and were leapfrogged in the table by Manchester City.

Birmingham City moved up to eighth place after winning 3-2 at Wigan Athletic, with Alex McLeish's side coming from a goal down to score three in 11 second-half minutes as Sebastian Larsson scored with two free-kicks and Colombia striker Christian Benitez netted the other.

Wigan, who led through a superb strike from Charles N'Zogbia, pulled one back at the end through Jordi Gomez but the defeat left Robert Martinez's frustratingly inconsistent side in 14th place -- four points above the drop zone.

Avram Grant celebrated his first victory as manager of bottom club Portsmouth with a 2-0 victory at home to Burnley, as striker Aruna Dindane made up for a first-half penalty miss by adding the second goal following defender Hermann Hreidarsson's 65th-minute opener.

Wolverhampton remained in the relegation zone despite ending a three-game losing streak by triumphing 2-1 against visiting Bolton, who dropped to second from bottom.