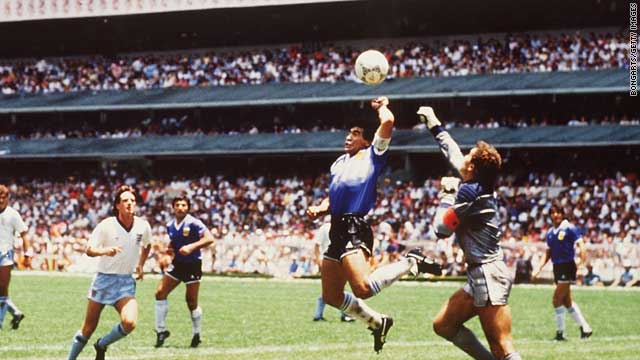 It has also opened the debate once more over the quality of officiating in football, and the need for technology in aiding officials in stopping such examples of cheating.

Henry was not the first, and he will not be the last, to take advantage of the trust of officials. Here are five other examples of injustices in football.

Brazil led 2-1 against Turkey with just minutes left of their tournament opener when Rivaldo began time-wasting at a corner-kick. Irritated by the delay, Turkish player Hakan Unsal kicked the ball in the Brazilian's direction, striking him in the knee. Rivaldo went down holding his face, and the referee sent off Unsal despite the linesman standing directly beside the Brazilian when he was hit.

Manchester United had dominated an understrength Tottenham side in this English Premier League encounter when the visitors' Portuguese midfielder Pedro Mendes chanced his luck from the half-way line. His shot looked to be heading harmlessly into the arms of goalkeeper Roy Carroll when he spilled it. The ball bounced halfway into the net but Carroll hooked it out before acting as if he had saved it. The Tottenham players appealed hopelessly as play was allowed to continue.

Australia were holding Italy to a 0-0 draw in the second round of their first World Cup appearance when Francesco Totti struck a precision long-range ball into the path of Fabio Grosso. The full-back looked to have dribbled past Lucas Neill's challenge when he decided to fling himself over the Australian's body, earning an injury-time penalty which Totti converted to give Italy the win.

Barcelona were chasing Real Madrid in the final stages of the La Liga season when they came up against city rivals Espanyol. As Barca pressed forward a deflected cross looped up in the penalty area, and both Espanyol goalkeeper Carlos Kameni and Lionel Messi went for it. Messi looked as if he was going to attack it with his head when instead he punched it in. The incident drew comparisons with a similar effort by another talented Argentinian.

Diego Maradona would go on to score one of the greatest goals of all time later in the game, but in the minds of many this was tarnished by the one he scored earlier. After England midfielder Steve Hodge's mis-hit clearance looped backwards into the penalty area, goalkeeper Peter Shilton went to punch it clear. But Maradona got there first -- leaping high into the air, the diminutive forward fisted it past Shilton and wheeled off celebrating. Maradona described it as the "Hand of God", but for England it came from a more devilish place.