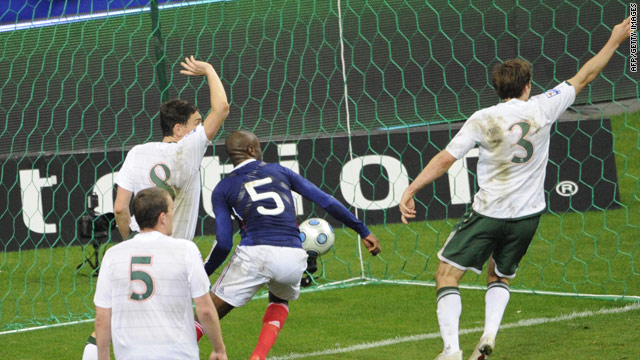 (CNN) -- A controversial extra-time goal by William Gallas saw France reach the World Cup finals after a 1-1 home draw against the Republic of Ireland in Paris on Wednesday night.

France were trailing 1-0 in the second leg, with the scores tied 1-1 on aggregate, when Arsenal central defender Gallas forced the ball home for the decisive goal.

But TV replays showed that his former club teammate Thierry Henry had clearly handled the ball twice before passing to him to head home.

Irish goalkeeper Shay Given frantically gestured to the referee and Damien Duff was booked for his protests, but the goal stood and Raymond Domenech's men eventually went through after surviving late pressure in the Stade de France.

Robbie Keane had given the Republic a deserved first half lead as he scored after a fine cutback by Duff.

The pair both had chances in the second half to put the game out of France's reach, but home keeper Hugo Lloris blocked Duff's effort after he was clean through and forced Tottenham star Keane wide from a similar position.

Cristiano Ronaldo will be going to World Cup after his Portugal side won 1-0 in Bosnia-Herzegovina to claim it 2-0 on aggregate in their European playoff match in Zenica.

Real Madrid star Ronaldo sat out both legs of the decider through injury, but despite his absence Portugal qualified for the World Cup for the third time in a row.

Raul Meireles' second-half goal in the second leg gave them a comfortable victory in a tie deemed awkward after a slender victory in the first leg secured though a goal by Bruno Alves.

A pass from Nan found Meireles, whose low shot found the net and sent the Portuguese, who reached the semifinals in 2006, through.

Slovenia upset Russia to qualify for the World Cup finals for only the second time with a 1-0 home win in Maribor.

Slovenia trailed 2-1 from the first leg and go through on the away goals rule with the aggregate score tied 2-2.

Striker Zlatko Dedic, who plays for Bochum in the Bundesliga, scored on the stroke of halftime.

He reacted first to a Valter Birsa cross from the right to grab the crucial goal.

Andrei Arshavin set up substitute Pavel Pogrebnyak for a late chance as Russia forced for an equalizer which would have put them through, but Dedic should have scored a second for Slovenia late on.

2004 European champions Greece are also through as they beat Ukraine 1-0 in Donetsk with Dimitrios Salpigidis scoring the only goal for the visitors on the half hour mark.

The Panathinaikos striker beat the offside trap after a superb pass from Celtic's Georgios Samaras and slotted home.

The teams played out a 0-0 draw on Saturday in the first leg in Athens.

Ukraine pressed desperately for an equalizer in the second half but to no avail.