(CNN) -- Frank Lampard and Steven Gerrard both scored twice as England booked their place at the 2010 World Cup in South Africa, with an emphatic 5-1 victory over Croatia in their Group Six clash at Wembley Stadium. 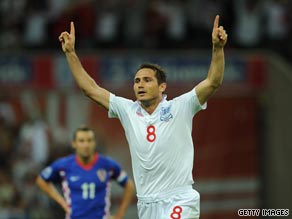 Frank Lampard scored twice as England booked their place at the 2010 World Cup with a 2-0 win over Croatia.

Chelsea midfielder Lampard converted a penalty in the eighth minute after Aaron Lennon was brought down inside the box following a clumsy challenge from Josip Simunic.

Gerrard added a second for Fabio Capello's side in the 18th minute when he headed home an excellent cross from the impressive Lennon.

Lampard then rounded off a neat move with a close-range header in the 62nd minute, Liverpool midfielder Gerrard nodded the ball past Croatia goalkeeper Vedran Runje to make it four.

Arsenal striker Eduardo scored a consolation goal for Croatia in the 71st minute with a simple tap-in after Robert Green had twice parried the ball before Rooney added a fifth, to seal the rout, in the 77th minute.

Elsewhere, Ukraine could only close the gap on Croatia after they were held to a goalless draw by a resolute Belarus side in Minsk. Would the World Cup miss Argentina?

In the group's other fixture Andorra remain without a point after they lost 3-1 at home to Kazakhstan as Sergey Khizhnichenko struck twice for the visitors.

Portugal gave their hopes of qualifying from Group One a welcome boost with a 1-0 win over Hungary in Budapest.

Brazilian-born defender Pepe scored the only goal of the game in the 10th minute to slightly ease the pressure on Portugal coach Carlos Queiroz.

Portugal's task though remains a difficult one as Daniel Majstorovic found the net nine minutes from time to help Sweden secure a vital 1-0 away win in Malta which keeps them two points clear in second place.

Denmark saw their lead at the top of the group cut to three points after Erjon Bogdani equalized Nicklas Bendtner's first-half strike to give Albania a point in their 1-1 draw.

France's hopes of automatic qualification now look unlikely after they could only manage a 1-1 draw with Group Seven leaders Serbia in Belgrade.

Raymond Domenech's side were reduced to 10 men when goalkeeper Hugo Lloris was sent off for a foul on Nikola Zigic with Nenad Milijas converting the resulting penalty; Thierry Henry equalized to salvage a point.

Suni Olsen and Arnbiorn Hansen were both on target for the Faroe Islands to give Brian Kerr's side their first qualifying win since 2001 with a 2-1 victory over Lithuania who had equalized through Tomas Danilevicius.

Romania were unable to make home advantage count against Austria after they drew 1-1 with Austria in Bucharest as Franz Schiemer equalized for the visitors with eight minutes remaining after Gheorghe Bucur had put Romania ahead.

Group Two leaders Switzerland needed a late goal from Eren Derdiyok as they picked up a point from a 2-2 draw with Latvia in Riga but second-placed Greece were unable to capitalize on the result as drew 1-1 away at Moldova.

Galatasary striker Baros completed his hat-trick with a well-taken penalty before the half-time interval and then struck his fourth midway through the second half.

Vaclav Sverkos grabbed a brace and fellow forward Tomas Necid also got his name on the scoresheet while San Marino defender Simone Bacciocchi was sent off late in the game after he was shown a second yellow card.

Slovakia took a massive step towards qualification with a 2-0 win over Northern Ireland in Belfast thanks to goals from Stanislav Sestak and Filip Holosko while Slovenia moved ahead of Nigel Worthington's side into second spot with a 3-0 win over Poland.

Germany remain top of Group Four after brace from Miroslav Klose gave them a comfortable 4-0 home win over Azerbaijan, although Russia remain only a point behind after they defeated Wales 3-1 in Cardiff.

Turkey remain four points behind Bosnia-Herzegovina in Group Five after they could only manage a 1-1 draw away to their qualification rivals.

Michele Polverino's goal for Liechtenstein cancelled out a penalty from veteran Finland striker Jari Litmanen to help his side secure their second point of the qualifying campaign with a 1-1 draw at the Rheinpark Stadion.

A late goal from Daniel van Buyten was unable to prevent Belgium from slipping to a 2-1 defeat to Armenia as Hovhannes Goharyan and Sargis Hovsepyan both struck to give their side their first win of the campaign.

Group leaders Spain cruised to a 3-0 home win over Estonia thanks to goals from Cesc Fabregas, Santi Cazorla and Juan Manuel Mata -- the win sealing the Iberian side's qualification to South Africa.

Italy moved four points ahead of the Republic of Ireland in Group Eight as goals from Fabio Grosso and Vincenzo Iaquinta delivered a routine 2-0 win over Bulgaria while Cyprus drew 1-1 with Montenegro.

Scotland are unable to qualify after they suffered a 1-0 home defeat to Holland in Group Nine while second-placed Norway remain in the balance despite a 2-1 win over Macedonia as the second-placed team with the worst record misses out on the play-offs.