By Mark Tutton and Greg Duke

CNN -- Fleet-footed winger Cristiano Ronaldo is Manchester United's most deadly weapon and officially the best footballer in the world. 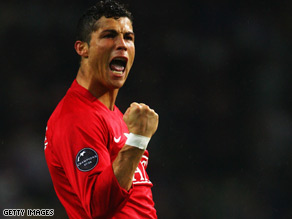 Born in 1985 on the Portuguese island of Madeira, the 23-year-old cut his teeth with Portuguese side Sporting Lisbon, where his amazing skill and dribbling ability alerted a host of top European clubs.

However, it was Manchester United manager Alex Ferguson who nipped in before his rivals to sign Ronaldo for a reported fee of $19 million in 2003.

That season his 31 Premier League goals won him the Golden Shoe award, making him officially Europe's most prolific goal scorer, and he was also the leading scorer in the Champions League, with eight goals.

He capped a remarkable campaign by scoring the opening goal, before also netting from the penalty spot, as United beat Chelsea in a dramatic Champions League final in Moscow.

Tall, elegant and powerful, Ronaldo is as good in the air as he is with the ball at his feet, as he proved with his header against Chelsea in last year's final.

He also possesses a remarkable and unique free-kick technique, managing to bend and swerve the ball to devastating effect, notably with the goal that effectively ended Arsenal's challenge in the semifinals of this year's Champions League.

Apart from his success at Old Trafford, Ronaldo is a regular figure for his national side, making his full international debut in 2003 and going on to represent Portugal at the 2006 World Cup and Euro 2008 finals.

However, despite his god-given talent, Ronaldo still gets criticized in Portugal for allegedly failing to replicate his United form in a Portugal shirt.

According to Forbes, Ronaldo was football's fifth biggest earner in 2008. Of his $21 million income, $12m was in salary and incentives from Manchester United and another $9 million came from endorsements with global brands like of Nike and Coca-Cola.