(CNN) -- FIFA has launches an inquiry into the tragedy at the World Cup qualifier between Ivory Coast and Malawi which left a reported 19 dead and scores injured. 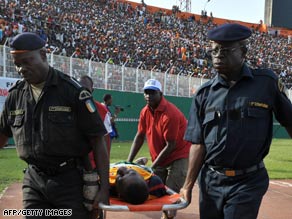 Police carry an injured person away from the football stadium in Abidjan on Sunday.

Sunday's match, won 5-0 by Ivory Coast, had not kicked off when a wall collapsed at the Felix Houphouet-Boigny stadium in Abidjan.

The incident took place as fans were heading into the stadium, reports said and sparked chaotic scenes with casualties treated on the pitch and taken away on stretchers.

The death toll is uncertain with some news agencies reporting 22 dead and others 19, with more than 130 people injured.

"Numerous spectators started falling over each other. And in the crush, they trampled on each other and that has led to 19 dead and 132 injured," he said.

Long queues occur in the Ivory Coast for football matches because fans frequently do not adhere to the numerical seating system on tickets, according to Goal.com.

Fans can wait for hours to try and win a prize seat, the Web site said, but FIFA has now called on the Ivorian football federation and local authorities to carry out an urgent investigation.

"Once this report has been received, FIFA will be in a position to make further comment, as well as continue our efforts to ensure that such tragic circumstances do not happen again," the statement said.

FIFA president Sepp Blatter also sent a message of sympathy in the aftermath of the tragedy.

"On behalf of FIFA and the worldwide family of football, I wish to express extreme sorrow and extend our condolences to the Ivorian football community and, most importantly, to family, friends and loved ones following the tragic deaths in Abidjan yesterday," he said.

A number of high profile English Premier League players were in the Ivory Coast side with Chelsea strikers Didier Drogba and Salomon Kalou both scoring.

The stadium being used for the match has a capacity of 35,000 and is surrounded by an athletics track.

Reports suggested that 50,000 turned up to watch, most without tickets.

Similar incidents have occured before at football matches in Africa and in June last year, 10 people died at a stadium in Monrovia before a World Cup qualifier between Liberia and Gambia.

The latest deaths to hit football come just days before the 20th anniversary of the Hillsborough tragedy on April 15, 1989 where 96 Liverpool fans died in a crush before the start of an FA Cup semifinal against Nottingham Forest.

iReport.com: Are you there? Share your photos, video, reaction

All About Cote d'Ivoire • Sports • Soccer