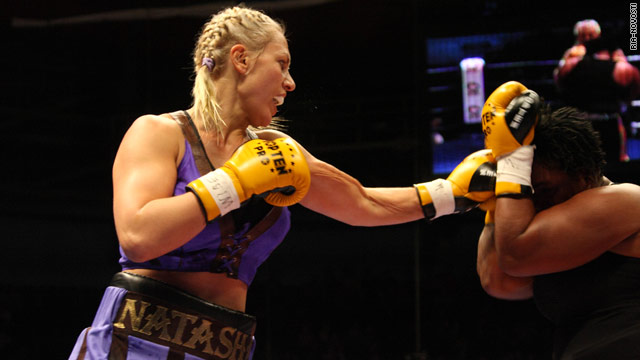 The new belt adds to her impressive collection of seven super-middleweight straps, setting a new record in women's professional boxing.

On Saturday night she collided with Pamela "Grenade" London from Georgetown, Guyana -- an opponent who came into the ring more about 60 pounds heavier than she, to contest the vacant Women's International Boxing Federation (WIBF) heavyweight title.

Dubbed "The Russian Tsarina", the single mother -- who has done photo shoots for magazines including Penthouse -- improved her pro boxing record to 22 wins and no losses, with 13 knockouts.

Video: Laila Ali steps out of the ring
RELATED TOPICS

Ragozina dominated throughout most of the fight using her hand speed and intense footwork, sending her opponent to the canvas in round eight in front of a packed and cheerful crowd of more than 5,000 spectators in Yekaterinburg, Russia's largest city in the Urals, some 1,100 miles east of Moscow.

In a short post-fight phone interview with CNN, a happy Ragozina said: "I am very glad I didn't let down my fans who were rooting for me in my homeland, and finally knocked out that "Grenade".

"I really felt the weight difference between us -- I hit her hard many times but she wouldn't go down. But now it's over and I feel fantastic."

Ragozina, 33 years old and nearly six feet tall, is the undisputed champion in the 168-pound weight class and the world's most-decorated female boxer.

Over the past few years, she has been living and fighting out of Germany, where fans know her as Natascha Ragosina.

On top of her athletic talents, Ragozina was named winner of this year's "Miss Sport Russia" beauty contest.

Ragozina's shot at the heavyweight throne was a one-off deal. She moved up into the most prestigious boxing division only in an attempt to lift a vacant title, but will stay in her natural weight class.

Although the heavyweight title is a big prize for her, Ragozina's biggest dream has been to fight Muhammad Ali's daughter, Laila. If that fight were to come through, it would be Ragozina's last, she said, win or lose.

Ali is also an unbeaten super-middleweight title-holder and potentially would be Ragozina's toughest challenge.

The Russian believes that an Ali-Ragozina card would be a huge event and could outsell many men's title fights. Besides, both women rank among the most attractive athletes in their sport, which could make their ring encounter even more of a draw. But now she's thinking that fight will never happen.

"I still have (this dream) to fight Laila Ali, but maybe it's not as intense as before," Ragozina told CNN during a workout in a Moscow gym on the eve of her departure for Yekaterinburg.

"I've called her out many times but she won't fight me. Multiple offers have been made and she has declined all of them, citing various excuses. And I'm just not interested in chasing after her anymore.

"I'm the undisputed world champion and I am comfortable where I am. Fight or no fight, I'm fine either way. But should she agree to a fight, I will be there. I won't duck her; I will be ready. After all, I was inspired to enter professional boxing when I first saw her fight. I have wanted to fight her ever since."

In an e-mail reply to CNN, Ali dismissed the claim that she's been avoiding Ragozina.

"I have a handful of girls that tell that same lie," she said. "[Ragozina's] promoter must have told her that they offered me fights many times to help build her confidence. My promoter offered her a fight years ago after I won my first title and they did not accept. ... I knew that she was not ready to face someone of my caliber and her promoter knew as well. That's why we have not fought."

As for the possibility of a future encounter, Ali said she does not want to fight anymore.

"There is nothing left for me in boxing," she said. "Ragozina is better than many of the girls in the super-middleweight division. But she does not have even 40 percent of what she would need in her arsenal to beat me.

"I feel that she would last a little longer than some of my past opponents, but the end result would be the same. I would take her to school and knock her out."

Ragozina entered the ring for her first professional fight in July 2004, after becoming a kickboxing and then boxing world champion as an amateur, according to her biography.

She won her first WIBF title in October 2005 and has defended it 12 times.

The other super-middleweight belts are from six other boxing sanctioning organizations.

Her trainer is Vyacheslav Yanovsky, a Seoul 1988 Olympic gold medallist.

Last year Ragozina, who has a nine-year-old son, starred in an action movie and has just released at book titled "Knockout from a Blonde."