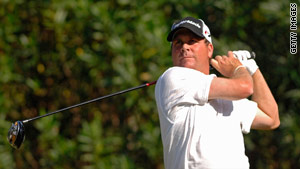 Barron played just one event on the PGA Tour this season.
STORY HIGHLIGHTS

Unheralded American Doug Barron has become the first player to be banned by the PGA Tour for taking performance-enhancing drugs.

The 40-year-old has been given a one-year suspension.

He is the first professional to fail a drugs test since the PGA and European Tours began their anti-doping programs in July 2008.

"I would like to apologize for any negative perception of the Tour and its players resulting from my suspension," Barron said in a statement on the PGA Tour official Web site www.pgatour.com.

"I want my fellow Tour members and the fans to know that I did not intend to gain an unfair competitive advantage or enhance my performance while on Tour."

In common with their policy, the PGA Tour did not release details of the drug taken by Barron to fail the test.

Barron, who turned professional in 1992, was a PGA Tour regular for eight seasons, with his best finish a tie for third at the Byron Nelson Classic in 2006.

He has won over $3 million but campaigned in recent seasons on the second-tier Nationwide Tour, playing just one event on the main tour this year. He is also reported to have had health problems.

The last time Barron captured the headlines was in very different circumstances at the 2006 Transistions Championship in Florida, where he removed his shirt to play a shot out of the water on the 16th hole at Innisbrook.

The incident was captured on television and was greeted with amusement by his fellow players.

Neither the PGA Tour or the World Anti-Doping Agency (WADA) have yet to comment further on the suspension.

Golf bowed to pressure from WADA to introduce drug testing in the sport last year.

PGA Tour testing is administered by The National Center for Drug Free Sport every week of the season, with all samples analyzed by WADA-accredited laboratories.