(CNN) -- There's something lurking in the depths of Loch Ness, Scotland and it has nothing to do with monsters. 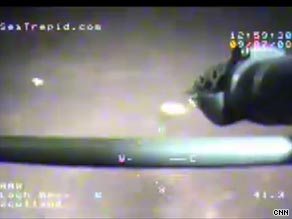 On a recent expedition to try and find evidence of the Loch Ness monster, U.S. research teams came across something quite unexpected -- not a prehistoric creature of the deep but thousands of plastic covered golf balls.

Mike O'Brien of SeaTrepid explains: "At first we thought they were mushrooms, there were so many. But when we lowered the camera, we were surprised to see that they were in fact, golf balls."

The smattering of balls were found roughly 300 yards from the beach and 100 yards from the shore where it is thought locals and visitors have been using the loch to practice their driving skills for quite some time.

Watch a video of balls being found at the bottom of Loch Ness. »

However, Shine doesn't believe this to be an environmental threat: "Certainly it's undesirable, but I don't think it will have a significant environmental impact on the loch."

His online company www.lakeballs.co.uk have been retailing "lake balls" for almost 10 years, but even his powers of retrieval would be challenged by the monstrous task of recovering balls from the bottom of the loch.

"I've dived in various lakes and found 10 to 15 thousand golf balls at a time, it's incredible -- but we've never attempted to clear a loch!"

Bobbing along at a depth of 754 feet, it is unlikely these balls of Loch Ness will ever see the light of day again.

To watch the remarkable footage shot by the SeaTrepid underwater robotics team, click on the link to see the "Outland 1000" in action.