(CNN) -- Roger Federer has been hit with a $1,500 fine for swearing at the umpire during his shock U.S. Open final defeat to Juan Martin Del Potro. 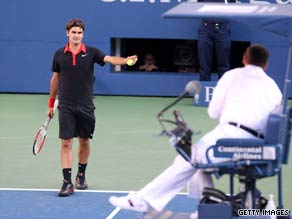 Federer argues with umpire Jake Garner during his five-set defeat to Del Potro.

The world number one became embroiled in an argument with Jake Garner at the end of the second set after complaining Del Potro was taking too long to decide whether or not to make challenges.

The Argentine successfully overturned an "out" call shortly before Federer's outburst, a point that led to him breaking serve and eventually taking the set.

During the exchange Federer was picked up on microphones telling Garner: "Don't tell me when to be quiet, okay? When I want to talk, I'll talk."

Federer's fine pales in comparison to the one meted out to Serena Williams, who was docked $10,000 for an altercation with a line judge at the climax of her semifinal with eventual winner Kim Clijsters.

Williams reacted angrily after being called for a foot fault, and unleashed a torrent of abuse at the official, who reported the exchange to umpire Louise Engzell.

The resulting penalty point for a code violation handed the match to Clijsters.

Williams later apologized for the incident. She was also fined $500 for racket abuse in the same encounter.

Over $31,000 in fines were handed out in the final grand slam of the season with Daniel Nestor, from Canada, forced to pay $5,000 for unsportsmanlike conduct towards a fan he confronted.

Federer will get an early chance to put his U.S. Open disappointment behind him when he plays for Switzerland in a World Group playoff tie against Italy this weekend in Genoa.