(CNN) -- The international governing body for athletics urged caution Friday after reports that the world-champion South African runner Caster Semenya has both male and female organs. 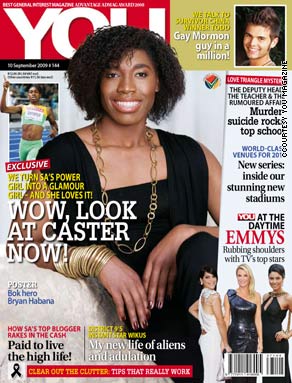 The front cover of You magazine shows Semenya after a recent makeover.

The Sydney Morning Herald in Australia and The Sun newspaper in Britain reported that gender tests ordered by the International Association of Athletics Federations (IAAF) show the 18-year-old is a hermaphrodite.

Neither paper named the source of their information. IAAF spokesman Nick Davies would not discuss the findings with CNN. "I simply haven't seen the results," Davies said.

"We have received the results from Germany, but they now need to be examined by a group of experts and we will not be in a position to speak to the athlete about them for at least a few weeks.

"After that, depending on the results, we will meet privately with the athlete to discuss further action." Has Semenya been treated fairly?

The IAAF issued a statement, saying no decision on the case will be announced until the experts can look at the results.

A final decision regarding the case is not expected before the IAAF Council meets in late November in Monaco, the IAAF said.

Davies also said the news reports should be treated with caution. The newspapers said extensive physical examinations of Semenya show she has no ovaries, but rather has internal testes, which are producing large amounts of testosterone. What is intersexuality?

She crushed her rivals by streaking away to secure victory in 1 minute, 55.45 seconds -- the best women's time in the world this year.

The IAAF said it was seeking tests on Semenya's gender even before that race. Davies said questions about her were first raised after her astonishing displays at the African junior championships in July, with her masculine build and surprising performance fueling the rumors.

Sport and Recreation Minister Makhenkesi Stofile said he was "shocked and disgusted" at the treatment that Semenya has received from the media, the IAAF, and the world.

"She may be a hermaphrodite, but so what? She is still a girl," Stofile told a news conference in Pretoria.

Even if Semenya has an unfortunate "proportion of hormones," he said, she is still "a young girl enjoying growing up." Stofile said he believes the teenager's human rights have been violated and that she was not given a chance to understand what the gender testing was all about.

South Africa will fight back if Semenya is excluded from further competition, Stofile said, adding, "It will be a third world war."

All indications were Friday that, at the very least, Semenya may be able to keep the gold medal she won in Berlin.

"Our legal advice is that, if she proves to have an advantage because of the male hormones, then it will be extremely difficult to strip the medal off her, since she has not cheated," Davies told CNN.

Semenya's countrymen -- including her father and the South Africa team manager -- have maintained that Semenya is a female.

Thousands of supporters crammed the airport in Johannesburg when she returned from Berlin last month. And this week, the athlete appeared on the cover of a South African magazine wearing makeup, jewelry and a glamorous dress.

Under IAAF rules, any time there is suspicion about an athlete's gender, the athlete can be asked to attend a medical evaluation before a panel consisting of a gynecologist, an endocrinologist, a psychologist, an internal medicine specialist and an expert on gender issues.

There are chromosome tests and scans of the athlete's body, Davies has said. He called gender verification -- which is generally required only for female athletes -- "an extremely complex procedure."

The process of gender verification has undergone big changes since it was first introduced for international competition in the 1960s, the IAAF said.

There were too many uncertainties regarding the mouth swabs, so the IAAF abandoned them in 1991 and the International Olympic Committee discontinued them in 2000, the IAAF said.

A proper test has yet to be found, the IAAF said, and the current round of tests is considered a good interim solution.

All About IAAF Council • South Africa