(CNN) -- Scotland's Paul Lawrie has a chance this weekend to achieve something which has even eluded Tiger Woods so far. 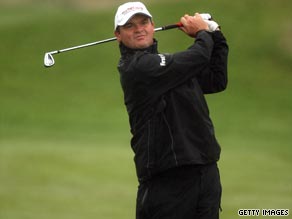 Paul Lawrie is halfway to equalling a European Tour record after the second round at Gleneagles.

Only two players -- David J Russell in 1992 and Jesper Parnevik three years later -- have ever gone through a European Tour event without dropping a stroke.

Woods failed to join them on the very last hole of the 2002 American Express world championship at Mount Juliet in Ireland, but Lawrie is halfway there after adding a 69 to his opening 67 in the Johnnie Walker Championship at Gleneagles.

Jose Maria Olazabal birdied the 18th for a 68, that included birdies on five of his first six holes. The veteran Spaniard shares third place on five-under 139 with Danish Ryder Cup player Soren Hansen (70), Gregory Bourdy of France (68) and Shiv Kapur of India (70).

"I wasn't in trouble a lot, but when I had to I obviously kept the round going, which you have to do when you have no bogeys," Lawrie told reporters -- after doubling his first day advantage.

"I've been prone to the odd hook in my career and I've certainly got rid of that the last couple of days. I missed a few putts, but I'm very pleased with the way I hit it again. Overall you're not going to grumble, but I'm a golfer and you always grumble!"