(CNN) -- In the space of just a year, Usain St. Leo Bolt has become one the most recognizable people on the planet. 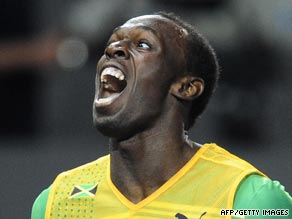 Jamaican sprinter Bolt is a born entertainer both on and off the athletics track.

The exploits of the likeable Jamaican, first in last year's Beijing Olympic Games and now at the World Championships in Berlin, have catapulted him to global superstardom and given the sport of athletics -- for so long mired with the uncertainty of drug-taking and significantly dwindling interest -- a welcome boost.

Bolt's feats have been nothing short of awesome.

Despite breaking the 100m world record prior to Beijing, Bolt was still not a household name and many observers were unsure whether or not he would even take Olympic gold, with more experienced compatriot Asafa Powell -- the former world record holder -- fancied by many to win the battle of the Jamaicans.

The fact that Bolt blew all his rivals away in both sprints and then joined Powell to win the 4x100m sprint relay -- smashing the world record in all three events -- ultimately ensured that a new athletics icon was born, a status magnified still further by the 23-year-old not only repeating his Chinese exploits in Berlin, but surpassing them, obliterating both world records yet again in the process.

Bolt grew up in the Montego Bay area of Jamaica. Like most Caribbean boys, football and cricket were his first loves; he only become interested in athletics at high school when his cricket coach urged him to switch sports due to his 'phenomenal speed'.

The rest, as they say, is history.

A steady run of improvement followed until a 200m gold medal, in front of his home supporters at the World Junior Championships in Kingston, finally marked Bolt down as a potential star of the future.

But it is not only Bolt's remarkable speed that makes him a phenomenon.

There have been many sprinters who have dominated their era; Jesse Owens, Carl Lewis, Maurice Greene to name three, but what separates Bolt is ability to entertain and make people sit up and take notice of his astonishing track exploits.

Naturally laid-back in character when the pressure is at most intense, Bolt's confidence and charisma have made him extremely popular with the public.

In the cut-throat world of male sprinting, where concentration and determination is etched on the faces of participations prior to the gun going off, there has never been room for a smile -- let alone laughter.

Yet Bolt has shattered that image of the pumped-up, testosterone-charged athlete.

In its place, the sport has a laughing cavalier as a world superstar. The face of athletics, the fastest man that ever has lived, is a smiling joker, willing those around him to have as much fun as he is.

A sport that was once its knees now makes front page headlines for all the right reasons, and every time the great man hogs the camera with his posturing and pouting before a race -- and his inevitable celebrations afterwards -- they should give him all the airtime he wants.

Usain Bolt is the greatest athlete the world has ever seen, and we must enjoy it just as much as he does.