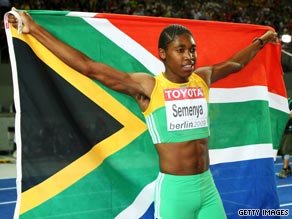 Semenya celebrates her gold, which came just hours after the IAAF called for a gender test on the athlete.

Semenya crushed her rivals by streaking away to secure victory in a time of one minute 55.45 seconds -- the best in the world this year and more than eight seconds quicker than her fastest effort of 2008.

However, the race was run amid controversy following the announcement by the International Amateur Athletics Federation (IAAF).
Have your say: What's your opinion on the IAAF's decision?

Semenya's masculine build fueled rumors, but the South Africa team manager said there should be no dispute.

"Even the ID that she has, the passport, says she is a female," Phiwe Mlangeni-Tsholetsane told CNN by phone from Berlin on Thursday. "There was no cheating on our part, or even on the part of the athlete."

She said Semenya was not bothered by the questions over her gender and was simply focusing on improving her times.

"If there are tests being done, we accept that. We can't stop that," Mlangeni-Tsholetsane said. "We have nothing to hide."

Meanwhile, Semenya received her gold medal in the podium ceremony on Thursday, receiving a warm ovation from the crowd in the Berlin Olympic Stadium.

Dressed in the yellow and green track suit of South Africa, Semenya mouthed the words of their national anthem as her country's flag was raised.

Results from the IAAF's planned tests are not expected to be known in the near future.

"In the case of this athlete, following her breakthrough in the African Junior Championships, the rumors, the gossip were starting to build up," Davies told reporters.

"The investigations will take some days or weeks and I'm not a doctor to give a conclusive answer on her gender. But we know her as a woman," Pierre said.

Athletics South Africa president Leonard Chuene accused South African media of trying to "destroy" Semenya, according to Sowetan -- which described the runner as "our golden girl."

"They have their own agenda and I can tell you that they will not succeed," Chuene said. "This girl has been to African youth championships and other international events, and why was this issue not raised then?

"Why now? Is it because she is not an athlete they were expecting to do well in her maiden appearance in the senior championships?"

Her father Jacob Semenya told the paper before the race that the accusations were unfounded.

"She is my little girl. I raised her and I have never doubted her gender. She is a woman and I can repeat that a million times," he said on Wednesday.