(CNN) -- Olympic champion Usain Bolt smashed his own record to end the reign of 100-meter title-holder Tyson Gay at the world athletics championships in Berlin on Sunday night. 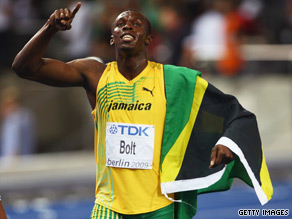 Usain Bolt celebrates after adding the world 100m title to the gold he won in Beijing, both in record times.

The Jamaican clocked an incredible 9.58 seconds to surpass the 9.69 he set in winning gold at the Beijing Games last year, with Gay finishing second after setting an American record of 9.71.

Former world record-holder Asafa Powell clinched a second medal for Jamaica as he finished third in 9.84. Is Usain Bolt the greatest athlete in history?

The race had been billed as the highlight of the championships, with Gay returning to form this year after failing to make the Olympic final.

The 22-year-old Bolt, by contrast, had his season disrupted after needing minor surgery following a spectacular car crash in May -- but has shown no lingering effects, physical or mental, from that setback.

"I was feeling good after the semis. I knew it was going to be a great race and I executed it," Bolt told reporters. CNN's Mark McKay predicts Bolt's greatness.

"It's a great time, a great feeling. I feel good in myself and I knew I could do it. There was a big build-up, great atmosphere. It wasn't going to be an easy race but I had a perfect start and just went from there.

"I came out here to do my best, and I did what I had to do. There'll be no partying for me ahead of Tuesday. I'll rest up as always, I need to rest up for the 200m."

Gay took some solace in that he managed to run the third fastest time in history.

"I ran the best I could. I just wanted to give my best tonight, it wasn't enough but I'm happy to have the national record," he said.

"I knew I had to put out a championship performance. I gave it my best and that's all I could do."

Bolt's training partner Daniel Bailey of Antigua was fourth in 9.93, ahead of Trinidad's Richard Thompson in a photo-finish, while Britain's Dwain Chambers ran his season's best of 10.00 to claim sixth on his top-level return following a two-year ban for using drugs.

Earlier on Sunday, Bolt had few worries in qualifying fastest for the final despite suffering a rare false start.

He clocked the fastest time of the two semifinals as he came home in 9.89 seconds, again being able to take his foot off the pedal long before the finish.

Gay won the second semifinal in 9.93 as he needed to dig deeper in edging out Powell at the finish.

Bolt was clearly up out of the blocks before the starting gun -- which under next year's new rules would have disqualified him automatically.

British sprinter Tyrone Edgar was then unlucky to have been adjudged to start just 0.094 seconds too quickly and be disqualified, setting nerves jangling among the competitors.

But Bolt kept calm and surged ahead of the field, slowing down as far as 20 meters from the finish as he allowed training partner Daniel Bailey of Antigua to gain ground on him.

Bailey clocked 9.96 with American Darvis Patton third and Burns claiming fourth in 10.01 to also qualify for the final.

Richards, who also defeated the Briton in the opening round, won the third and slowest of the three semifinals in a time of 50.21 seconds, while Ohuruogu clocked a season's best 50.35 as she made a traditional strong finish.

Jamaica's Shericka Williams qualified fastest in winning the second semifinal in 49.51 ahead of Russia's Antonina Krivoshapka (49.67), with Debbie Dunn of the U.S. claiming one of the two other spots up for grabs in 49.95.

Novlene Williams-Mills of Jamaica won the opening semi in 49.88, edging out Botswana's Amantle Montsho (49.89), while Russia's Anastasiya Kapachinskaya also went through in 50.30.

Jessica Ennis claimed Britain's first world heptathlon title as she capped a dominant weekend by winning the final heat of the 800m on Sunday night to finish 238 points ahead.

The 23-year-old had led Kamila Chudzik by 171 points going into the seventh and final discipline after placing ninth in the javelin, with the Pole finishing second overall ahead of Germany's Jennifer Oeser, who kept Olympic champion Natallia Dobrynska of Ukraine out of the medals.