BERLIN, Germany (CNN) -- Women's boxing will be included at the 2012 Olympic Games in London, the president of the International Olympic Committee announced Thursday. 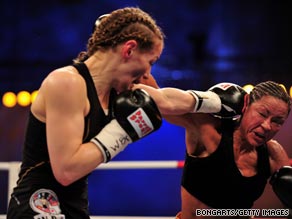 The decision came during a two-day IOC Executive Board meeting in Berlin, at which board members also decided to propose golf and rugby for inclusion in the 2016 Olympic Games.

"I can only rejoice about the decision of inclusion of women's boxing," IOC President Jacques Rogge told reporters.

"I think it's a great decision. Boxing was the sole (Olympic) sport with no women involved.
"The sport of women's boxing has progressed a lot, a tremendous amount, in the last five years and it was about time to include them in the Games."
Have your say - should women's boxing be included?

A men's class will likely be axed to make room for three women's weight categories at London 2012, the UK Press Association reported.

Women will compete in the flyweight 48-51kg class, lightweight 56-60kg and middleweight 69-75kg, the agency said.

When the IOC dropped baseball and softball from the 2012 Olympic program several years ago, it said it would consider adding new sports that had a clean reputation and a wide appeal.

Rogge pointed out that women's boxing has around 200 athletes who could potentially compete in 2012, while softball has only around 120. As a result, he said, the IOC considered women's boxing to be more popular.

Women's boxing has boomed in Britain since 2005, with the number of registered female fighters rising from 50 to 600, PA reported.

Softball and baseball were considered for inclusion in the 2016 Games along with squash, karate, roller sports, golf and rugby, but the board decided to consider only the last two.

The IOC has not yet selected the host city for 2016, but its board members will submit golf and rugby to the full IOC session for a final decision at its meeting in Copenhagen, Denmark, in October.

"Golf and rugby scored high on all the criteria," Rogge told the IOC's official Web site. "They have global appeal, a geographically diverse line-up of top iconic athletes and an ethic that stresses fair play."

The International Golf Federation has proposed two four-day strokeplay tournaments for men and women, with 18 holes per round and medals awarded to the three players in each with the lowest scores.

The International Rugby Board has proposed men's and women's Sevens tournaments, with 12 teams in each being divided into two pools before semifinals and finals.