LONDON, England (CNN) -- The European Tour looks set to suffer a major body blow this week when it announces a reduction in prize money for this year's flagship $20 million Race to Dubai and Dubai World Championships. 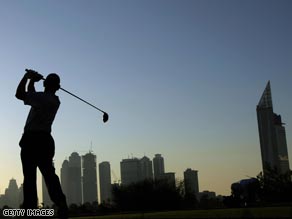 The Race to Dubai has been hit by the global financial downturn.

A golf insider from the region has told CNN that the impact of the credit crunch on Leisurecorp, the company behind the concept, and the fact the Dubai World Championship has not attracted the handful of marquee sponsors hoped for, has led to a decision to reduce the payout for one of golf's most lucrative competitions.

Since the start of the year Leisurecorp has made many staff redundant, put its flagship development "The Jumeirah Golf Estates" on hold and its CEO David Spencer, the brains behind the "Race To Dubai" concept, has left the company.

The original plan was for the top 60 players on the European Tour's money list to compete each year for a share of a $10 million prize fund in the season-ending Dubai World Championship.

It was billed with great fanfare by the European Tour as the richest golf tournament in the world, but that bragging right now looks in jeopardy. A further $10 million bonus pool for the top 15 on the Race to Dubai list was also part of the concept.

The source said that the prize fund in both would be considerably reduced but was unable to give an exact figure.

When the Race to Dubai was launched last year in China many top players, like American Anthony Kim and Colombian Camillio Villegas, committed themselves to making more appearances on the European Tour in order to qualify for the lucrative tournament.

With the reduction in prize money and persistent rumors among players that the Race Dubai will only be staged for one year instead of the original five, as promised when it was announced, the commitment of the players may be tested.

The move will come as a major embarrassment to the European Tour who had rebranded itself around the sponsorship and described the launch of the Race to Dubai as the most significant development in its history.

The concept was supposed to help it keep pace with the PGA in the U.S. which outstripped its European rival's prize fund by many millions of dollars, especially with the $10 million FedEx Cup.

Dubai banked on the Race to Dubai to put it on the global map as a golf destination and was seen as the perfect marketing tool.

But Dubai's financial struggles have affected many golf business such as the Tiger Woods course where construction has been put on hold and is now believed to be up for sale.

The Race to Dubai replaced the European Tour's Order of Merit last year when it was launched.

The move comes after another tournament which is backed by Leisurecorp, the European Open at the London Club in England, reduced its prize money this year.

A European Tour spokesman told CNN: "The agreement is proceeding as planned but (chief executive) George O'Grady will be making a visit to the region in the very near future."