LONDON, England (CNN) -- It carries the nickname "America's Finest City," and right now it appears San Diego is living up to the hype. 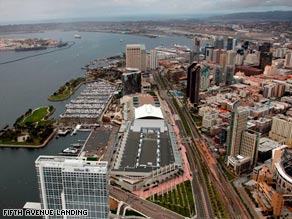 Growing on the water: San Diego is becoming an increasingly popular super-yacht destination.

Though the international financial crisis has precipitated economic woe across the United States, developments in San Diego's super-yacht industry don't appear to be slowing.

Fifth Avenue Landing, a stylish new facility promising the ultimate docking experience for super-yachts up to 300 feet long, has just opened in city's downtown area. The marina, which is close to local attractions and top hotels, boasts 12 high-quality berths, each offering a concierge service.

This impressive project is just the latest step in a significant development program for the west coast city, which is which is now beginning to compete with its northern neighbor, Los Angeles, as a destination for super-yacht owners.

In 2005, Forbes rated San Diego as the fifth wealthiest city in the U.S. and in the years since, for the super-yacht industry particularly, the region has continued to develop rapidly.

Today, the city is buzzing with super-yacht designers, builders, and brokers, and it now has plenty of facilities to accommodate the industry. There's also the annual "YachtFest" show, which will be going ahead in September this year and is expected to attract interest from super-yacht makers and owners around the world.

Numerous marinas have sprung up amid the increasing interest in the city, with Kona Kai Marina, Shelter Island Marina, and The Wharf, among some of the most notable developments.

Outside of the private super-yacht industry, San Diego is also home to the largest shipyard on the west coast of the U.S. -- General Dynamics' National Steel and Shipbuilding Company. Many cruise lines pass through the port and there are plans for a new cruise ship terminal to open in 2010.

Much of the success in attracting super-yachts has been credited to the San Diego Super-yacht Association (SDSA) -- a collective of local super-yacht designers, builders, brokers and other interested parties that was formed in 2006.

Super-yacht director of Marine Group Boat Works and founding member of the SDSA, Fred Larsson, told CNN that the key to San Diego's recent profile boost was realizing the economic needs of the industry.

"San Diego had the basic requirements of super-yachts covered already with the natural deep water harbor, year round superb weather, geographic location as the gateway to the Pacific and a wonderful youthful city. Then when you add the super-yacht facility upgrades it's a no brainer. San Diego has it all," he said.

Larsson said the SDSA had been instrumental in developments as the combination of shipyards, marinas and suppliers working together means they have a good all-round knowledge of what super-yacht owners want when they come to port.

The combination of major refit facility improvements, new marinas, marina expansions and an effective marketing campaign are behind the success, he added.

Despite the international financial crisis, which threatens to hurt the super-yacht industry around the world, Larsson said that San Diego should not suffer too much as interest from owners is still growing.

"Due to the sheer size of the city and nearby cities there is so much for owners and crew to do here on their time off, the beaches are fabulous, Vegas is an hour away, there are 100 golf courses in and around San Diego.

"It's a metropolitan feel with small town charm. That's what makes us different," he said.