LONDON, England (SuperYachtWorld) -- It may be named after the high-octane James Bond thriller, but does the latest offering from enthusiastic owner John Staluppi hit the jackpot? 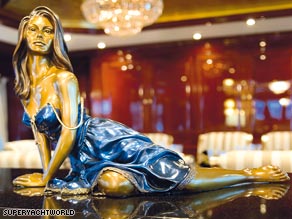 Bond style: Casino Royale is the latest in a series of 007-inspired super-yachts.

"Casino Royale" was the first action-packed novel by Ian Fleming, paving the way for 11 more spy novels, and a catalogue of iconic films charting the adventures of secret service agent James Bond.

But it is also the name of the very latest in a line of yachts owned by renowned yachtsman John A. Staluppi -- all of which have been named after one of the Bond tales.

They may well be tributes to 007, but Octopussy, Moonraker, Thunderball and The World is Not Enough are also some of the fastest super-yachts in the world. Octopussy was built in Holland and Moonraker in Norway, both from plans drawn by the innovative Dutch naval architect Frank Mulder, and Thunderball was designed and built by Dennison Yachts in Fort Lauderdale.

To build The World is Not Enough, John created Millennium Superyachts in 1998, a company that will be a vehicle for future builds.

It was the 43.5 meter Octopussy, which broke the 50-knot barrier 18 years ago, that first brought the name of New York-born John Staluppi to the attention of super-yacht aficionados.

The self-made millionaire left school when he was 16 and worked as a mechanic in Brooklyn before going on to start up one of the most successful car dealerships in North America -- a business that enabled him to indulge his passion for racing fast boats, and then later for super-yachts.

To build Casino Royale, Millennium Yachts has teamed up with the U.S.-based Christensen Shipyard, describing the new launch as the first of its "Millennium editions." Joe Foggia, president of Christensen Yachts, explains: "She has over 650 square meters of space on board -- that's a lot in a yacht of her length."

There is no doubt that John's vision and passion bring fervor and excitement to a sometimes conservative industry. There are, after all, few super-yachts aboard which you will be greeted by frosted-glass panels sweeping down the central staircase, delicately etched with the silhouettes of Bond girls.

And then there's the hand-crafted marble roulette wheel set into the deck of the main saloon, made by master-craftsman John Homchick at Christensen's dedicated marble shop.

Casino Royale isn't a speed machine to match his previous yachts but, as we chatted on the deck of his latest creation, it's very clear that John Staluppi is an owner who knows just want he wants. "So what is a super-yacht? To me, it has to be at least 120 feet overall with a master suite and four guest cabins, room for six crew and somewhere to carry the tender.

"And oh, one more thing, there has to be no teak. It adds weight, it's a pain in the butt to clean, and the oil gets all over my carpeting!" he says with a smile.

We look around and notice the acres of teak decking -- it's stunning, so perhaps this is one fight he's better off not winning.

The yacht's interior can best be described as richly ornate, yet it remains tasteful and has the softer touch of John's wife Jeanette in many of the living areas. Atop the divide sits a figurine of Vesper Lynd, the heroine from Casino Royale.

In terms of accommodation, John has achieved the optimal use of space he was looking for. The master stateroom is accessed through the owner's study with its dark, leather-topped mahogany desk and cream leather office chair. As you may expect from a James Bond fan, a gargantuan double bed dominates with a mirrored deck head above.

Below, the guest cabins are equally well-appointed and appear to be larger than the standard on most yachts of this size. Forward are two twin cabins; astern of them two suites with king-size bunks and further aft is a stunning full-beam VIP suite.

Two decks above is the elegant sky lounge -- a party room if ever we saw one. The onyx-topped bar is seductively illuminated from within the stonework and is a perfect spot to enjoy a vodka martini or two. The lounge also has a custom-designed entertainment center and a huge cinema display with a movie library that fittingly boasts every one of Commander Bond's adventure-packed movies.

Captain Zak Matten is pleased with the work so far: "I really like the way her bow and stern thruster work together. I can get her to move just about anywhere. I can even shift her sideways when I have to.

"Her maiden voyage was up into Alaska and we encountered our fair share of lumpy seas. This U.S.-built boat can hold her head up when compared to European yachts; she is up there with the best."

She may not have the speed of her predecessors in the Staluppi stable but Casino Royale is nevertheless an impressive yacht. She will bring her owners a lot of enjoyment, and for the guests who are lucky enough to be invited on board the party is about to begin.