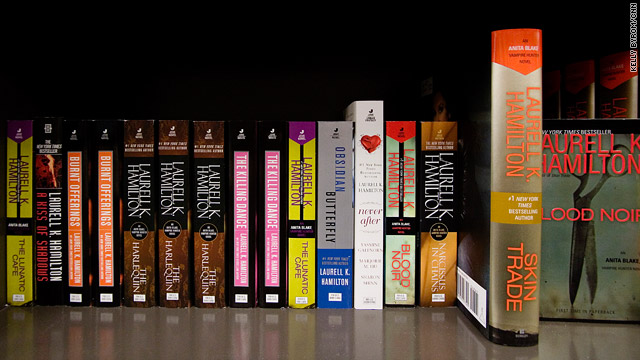 Steamy vampire romance novels are burning up the shelves in book stores and had a loyal following long before "Twilight."
STORY HIGHLIGHTS

(CNN) -- If the chaste Bella and Edward lived in writer J.R. Ward's world, they would have hit the sheets long ago.

And while she applauds author Stephenie Meyer's "Twilight" success, Ward is the first to say they aren't vying for the same fans.

"I do not want minors reading my books," Ward said.

"Stephenie Meyer, in writing those great books, got a whole new generation interested in vampires and further cemented this romantic myth around them," Ward added. "A lot of her readers' mothers have in turn found my books."

Yearning for the undead may be all the rage now, but vampire romance novels are nothing new.

Ward is part of a group of writers who have flourished in a subgenre known as "paranormal romances" where the love -- and the sex -- is often out of this world.

So are the profits. According to the Romance Writers of America, romance fiction generated $1.37 billion in sales in 2008.

"It's a fairly traditional, forbidden romance story, with a twist," Scott said. "The cool thing is that apparently vampires are always handsome and debonair, although they are dead."

Sandy Coleman, publisher/senior editor of All About Romance, said fans of the vampire romance novels are like any other romance reader who enjoys the fantasy of the story.

"Definitely romances are an escape," Coleman said. "There are some very, very good writers writing romance these days."

Coleman said there is no longer a stigma about being a romance fan. Her site has been online for 11 years and has about 360,000 visitors a month, she said.

The site is often a place where intelligent women come to discuss their favorite romance novels, Coleman said.

"There's nothing to be embarrassed about when it comes to reading romance anymore," Coleman said.

Things weren't quite like that when Laurell K. Hamilton got her start.

The author said she was rejected more than 200 times when she first tried to get her books published. Now, more than 20 years later, her "Anita Blake: Vampire Hunter" series is one of the best-selling in the genre.

"Everything now that is so hot, when I was trying to sell this, nobody wanted it," said Hamilton, who is working on her 19th novel. "[Vampire novels] have never been as prominent in the media as they are now."

Hamilton said she has gotten some crossover in fans of her books who have also read the "Twilight" series.

The author said that in polling those readers, she learned that regardless of their ages, they found similar appeal in Edward and Bella's story.

"They loved that [Edward] waited on the sex and was content to do that," Hamilton said. "Vampires have become the new Prince Charming."

Hamilton, whose series features a strong, independent heroine, said she was a little blown away that women were still craving a white knight to sweep them off their feet.

"One twentysomething woman explained it to me like this," Hamilton said. "She said 'Well, I just got out of college and I can't get a job, none of my friends can get jobs that will let us be able to move away from home, so if we can't wait for Prince Charming to come rescue us what are we going to do?' I thought that was interesting."

That has gotten loyal readership for writers like Hamilton and Charlaine Harris, whose Sookie Stackhouse series was made into the wildly popular HBO series "True Blood."

Heather Graham (not the actress) has written vampire novels under both her name and her pseudonym, Shannon Drake.

Graham said she enjoys the creativity that comes with creating romances with vampires as the main characters.

"There is total freedom," said Graham. "The only rules are once you make any, you then have to stick to them."

Graham, whose book "Dust to Dust" melds two frightening topics as vampires seek to save Earth from the 2012 end of the world prophecy, said life can be fraught with lots of anxiety.

Vampire romances are a good escape from that, she said.

"You get to have something sexy, something edgy and something that is scary, but outside the realm of our everyday scary," Graham said.

Ward said women gravitate toward vampire heartthrobs because the vampires are "always in 3-D."

"They are deadly, they are dangerous and they are desirable," Ward said. "Big, bad, sexy and lethal, but redeemable is a great setup for a romantic hero."

Suck on that, zombies!