NEW YORK (CNN) -- A federal judge on Thursday threw out an author's claims that Jessica Seinfeld, the comedian's wife, plagiarized from her cookbook, but the judge left open claims of defamation against Jerry Seinfeld himself. 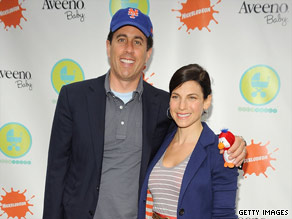 Jerry and Jessica Seinfeld attend an event in New York City in June.

"This is a complete victory for Jessica Seinfeld," said Orin Snyder, Seinfeld's lawyer.

"The court categorically rejected the claim that 'Deceptively Delicious' infringed the copyright and trademark of the plaintiff's book," Snyder said. "The federal judge ruled that 'no reasonable fact finder could conclude' that copying occurred here given that the works are 'very different' and that Jessica's book 'has a completely different feel.' "

But Lapine's lawyer, Howard B. Miller, said his client may appeal the dismissal of her copyright and trademark claims, and will refile in state court claims against Jerry Seinfeld.

Lapine's defamation claims against the comedian refer to a comment he made on the "Late Show with David Letterman" in 2007, when he compared the fact that Lapine uses three names to the fact that assassins sometimes use three names, as was the case with Lee Harvey Oswald.

"The claims against Jerry Seinfeld for defamation are still fully alive," Miller said. "He just says he is joking; we don't think calling someone an assassin and a wacko is a joke."

"I'm up against a very powerful opponent," Lapine said in a telephone interview from her home in Westchester County, New York. "Justice is not always served."

Lapine, a 45-year-old mother of two, said she has gone on to publish two other books, all in the "Sneaky Chef" series.

All About Jessica Seinfeld • Jerry Seinfeld